Rynek Zamoyski i Solny zasobne musiało być i w towar obfitować przedni, since Gniński Stanisław, voivode and Rzewuski, Chełm starost, in the message from King John going to Turkey, For a dozen or so days, they stop here for a stop, that we may have garments worthy of the journey.
And all sorts of wonders could be seen by the curious eyes of the townspeople and beautiful townswomen of Zamość: it was the papal nuncios that were drawn by the square to the castle - it was the royal processions that walked dignified among the bells tolling, shots and a crowd of shouts and nothing, that they were nudged in the crowd, or with an unattractive cap under the bonnet, a joke was used - and this is the bizarre cuts of robes to look at to your heart's content, when a timid flock is the court of royal wives, kind of modestly, yet smart, for show, the dust of the road shakes itself off and the silk rustles on the clothes - and this is an interesting look at the faces of the riders and find out what the fate of the new head of the stadle will be, which stranger, a young French woman, good enough and such abundance, with a parade into the palace leads - or: what a wife of the king, which they know after all, for the relatives of the ordinates, he often stayed in the castle - this is the favorite of the ordinate Teresa Michowska and the most delicate missions of the confidant, to admire or say to the handsome Captain Bernhard at the head of the orderly dragoons, that sadness is present at the faces of Władysławowa's widow, and Kazimierz's wife - she had a bad life, the king hated the townswoman in Lviv, the merchants said, Jadwiszkę —

And Hussein Aga, You can also look interesting for both sexes of the Turkish envoy, though it will become commonplace with time, when for a few months he hangs around one of the market tenement houses, serving you, who waits endlessly for the response of the States of the Republic of Poland after Korybut's unexpected death -

Viewing each other's fancy decorations of tenement houses, God for glory, for myself and for little children, for the comfort of those erected -

Admire the splendor of the houses presented on the occasion, like then, when it is Kirkorovich, burgher, he organized wedding ceremonies for his daughter Róża with Krzysztof Warterysowicz, the whole of Zamość and probably half of Lviv for the wedding party, having asked -

She doesn't feel like it, like in the past, look at the carpenter, Szymon German, who efficiently binds the roofs, and at the gravedigger Panka, Morand helpers - nor admire the daring councilor of Sandomierz, the first settler in Zamość, Wojciech Wnuk Słowieński, he walks along with Morand on the walls and buildings of the city, striving for the welfare of the inhabitants - neither to look at the corner windows from distant Krakow to the Academy of the arriving Bachelor's students - nor to drag in the hall with the dormitories of Jewish women, make them baptized as it is, though after-captivity, expedite.

The music and the guard of honor of them seem a kind of unpleasant entertainment, armed townspeople were made, to August II's assistance, it led him bustlingly from the collegiate church to the castle.

The Saxon commander Flemming tricked into the city, the vigilance of the crew by lulling their soldiers with shopping - the Bar Confederates stretch nearby - Pulaski Kazimierz himself enjoys a few days in Zamość - and the ordinate Jan Jakób is protected from them and from Muscovites and the city seems to the Austrians, so, that I don't know what to do, towards whom to turn -

When Józef II visits Zamość, you can talk and talk to your neighbors a bit outside the tenement house of the townswoman Kawowa and look at the dignified shadows moving behind the glass panes, and looking at the sparkling sky and the August stars dripping from it – tears, leave your head for some reason and sneak back home!

And then again at the imperial mother's execution with a mourning pump, stare a little, be soon on the brightest command for the welfare of the imperial arms, according to the established order, during long prayers, knee knees in the collegiate church.

Prince Józef Poniatowski will be pleased with the hope of improving his fate and with a short stay - and then the French eagle will hang on the town hall and the heavy ones will come, oh how hard the days after Napoleon's retreat from Moscow.

All the joy of the old, years gone by, when the townspeople will look closely, for the walls of the fortress that are defended together, for the toil of soldiers, to smaller and smaller, almost nondescript right, what to do with nothing, despite the best intentions, when all the stock in large warehouses has been given to the common use - the joy of past years will run away, when we look at these grateful hearts, nice women wounded in hospitals, for which the last ranches on a string were torn to pieces by the townswomen of Zamość, the lack of ammunition forcing the living ones to go on night trips, starved skeletons, which, finally, in the morning of one, at the pitiful snare of drums, in the marketplace they will hear an order to end their suffering, but also its independence, defended desperately, scrap of land, which has remained so far. 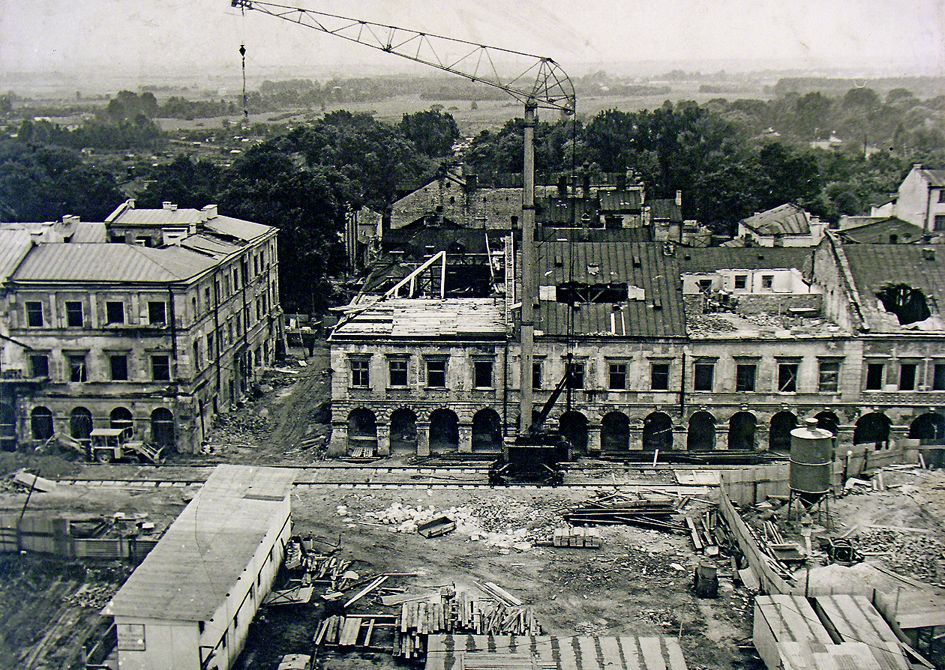 And if a moment comes after that, what to forget for a moment will allow the heavy burden of days lazy in captivity, like that tightrope walker Kol tera funny goats that allows you to watch, it will end up not merry at all, because a fire from a spark from a fire perceived by an interesting and careless woman, who will consume houses in one fell swoop. It will end up sad and remind you of all those fires, how many times in different times they visited the city and others, perhaps the flames of the pestilence are even more terrible than the fires, which neither Szymon Piechowicz's efforts, nor Kacper Szolec's testament, ordering professors of medicine from the Zamość Academy to help the inhabitants during the death - they did not prevent it.

The clink of chains coming from the casemates, measured patter of prisoners for the night in the dungeons of the town hall closed rot, they will remove any desire to smile even faintly.