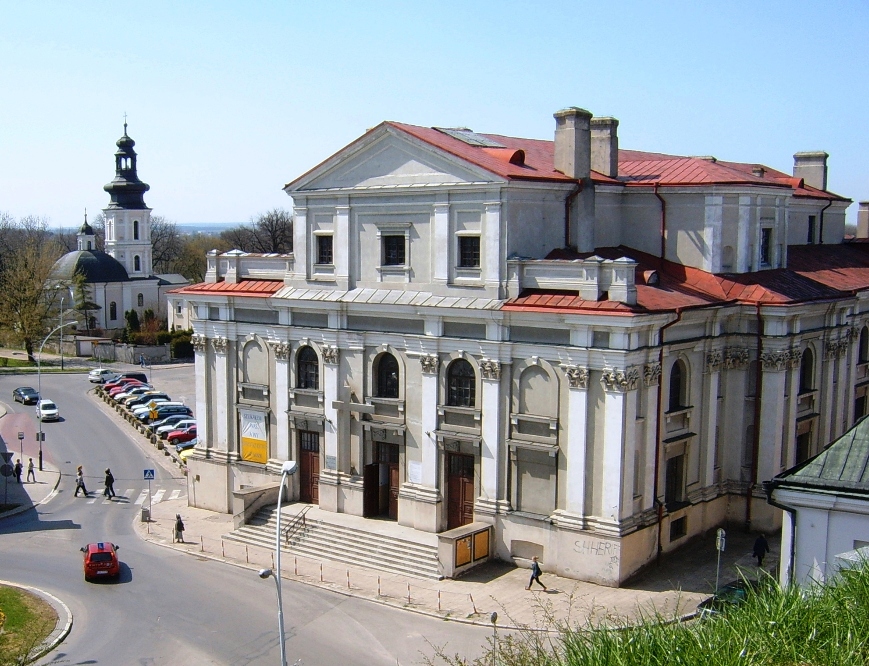 Through Strzelecki Square, closed by the Lviv gate, a new and former vicar's house, with the silhouette of the eastern marshal and Łukasiński's cell in the background, let's look at the white one, renaissance-baroque, an eminently ecclesiastical building.
The vastness of her, seriousness slender, columns with the flowers of ornate capitals leaning tightly against the walls, niches and cornices, the entrance itself, finally from the small green area, leading to the interior, indicate, it's a church.
The lack of towers is misleading, behind which our eyes search in vain.
But we are not wrong.
Here is an illustration of a long time, on which the gable walls pile up proudly, pulling the whole structure higher and higher to the sky, giving it lightness.
Today's building, compared to the old one, is a bit heavy due to their lack, nevertheless, it has retained its eminently ecclesiastical character, which will not be denied by the inscription "People's House", nor on the opposite side, the title of the film encouraging you to watch. 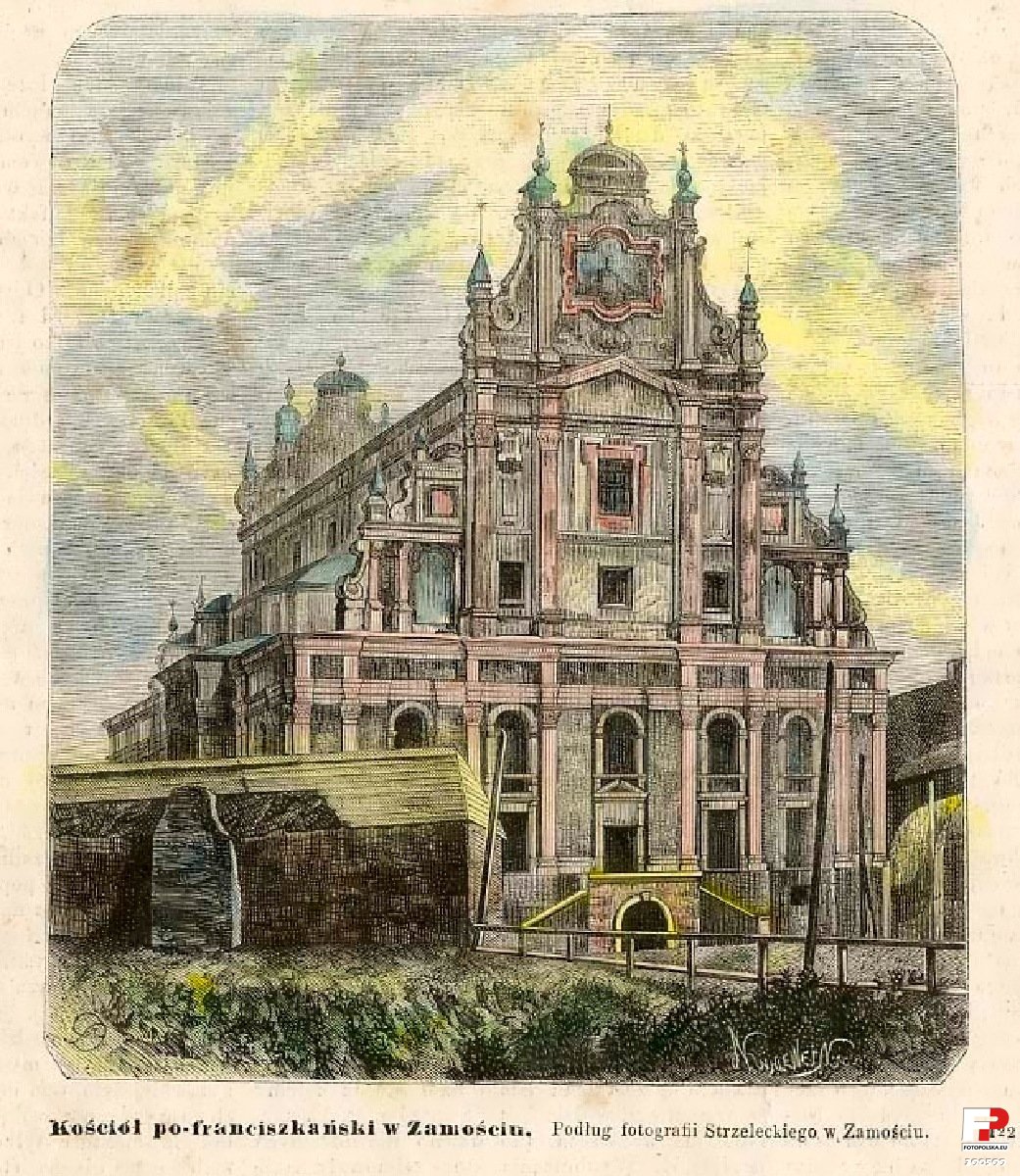 It was indeed the church.
For Fr.. The. Franciscans in Zamość, while the chancellor was still alive, those who settled and at first liked the wooden church of St.. Cross in the suburbs, by the chancellor's son Tomasz v 1637 r. dedicated to the Blessed Virgin Mary founded, It also had extensive monastic buildings on the site of today's Strzelecki Square.
The work of the father was continued by his son Jan, grandson of the chancellor.

The fathers felt well in the beautiful temple and monastery building, on two raised floors, in the courtyard of which in the evening they moved the rosary seeds in prayerful concentration.

They rendered services to the society in Zamość, or at the Academy, teaching how Fr.. Cyril or Fr.. Franciszek Żardecki - or his name to the papal nuncios, like Fr.. Ludwik Karsza, who visited Horace Filip Spada regarding the censorship of books - or, finally, as he was famous for his godly life. Benjamin Pańkiewicz infected with rescue and relief.

He was rich in church equipment and in scholarly books sacrificed to the fathers by these, who wished to rest forever in the basement of the temple.

Later, different railways passed, and St.. Stanisław's tiny church, whose dome and tower are visible from the perspective of the square.

When by force, or rather lawlessness, During the first partition, these lands fell to Austria, Emperor Joseph II abolished the Order of Fr.. Franciscans and life in the temple died out.

When the imperial whim called the order back into action, life began to pulsate in the church walls anew, to die irretrievably in 1809 year.

Stripped of the altars, although still the dignity for many years preserving the church building, became a warehouse and barracks of the Russian army and at the end of the 19th century it lost its gable walls - and so it remained humiliated for many years, until the time when the Polish government took it over from the partitioning government after the World War and intended to withdraw from the original owners. But the building was not intended to perform primary tasks, because the church had no money for it, to restore it to its former state - and it remained so, how fate had ruled him.

The great space of the three-nave church housed a large theater and cinema hall at the same time, People's House with a beautifully and purposefully arranged meeting room, as well as many social organizations and institutions.

Spacious dungeons stretch below it, from which, according to the stories, corridors lead to the city. This news has not yet been investigated; The lowest basement floors covered with rubble prevent access to each other. But their existence is true, because v 1827 r. workers, doing some work in the basement, at a great depth they found them, even finding a hidden treasure can be seen prudently when leaving the monastery several times, when there was no one to watch him. Valuables, goblets, silver coffin, it is not known where they belonged to this discovery. The golden monstrance, on the other hand, by the will of W.. X. Konstantego was given to the cathedral church in Lublin and it is there so far.

Another treasure in the form of church equipment in a deposit in the collegiate temple after the dissolution of the order. Franciscans folded, it was used partly for minting coins at the Zamość mint, which General Hauke ​​Maurycy launched for some time during the siege of Zamość in order to circulate the most necessary two zloty and six groszy coins to pay the outstanding pay.

There is no trace of the former monastery buildings - they gave way to the spacious Strzelecki Square.