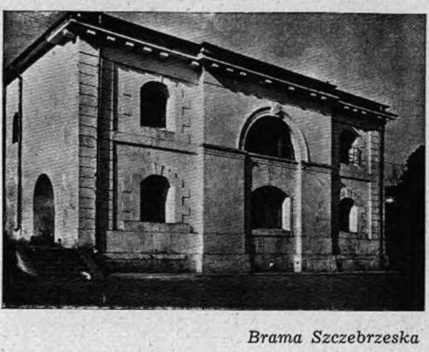 So at least she's old, The nearby Szczebrzeska Gate is silent, but maybe a story moving its events alongside her, will speak to us.

It has a completely different appearance than the two already known trips around the city; used for the significantly lowered terrain here, stood on the southern side of the city, above the green area of ​​meadows, once a basin of stagnant waters, among which the dike, thrown from the gate to the southwest, she took her out to the already dry western areas.

Once upon a time in this wide spilled water he watched with his finger fist raised into the sky a mill built by the hetman.

The dike was the subject of frequent enemy attempts, because breaking it, threatening to drain the waters, exposed the southern side of the fortifications and made it more accessible. Hence the frequent raids on the besiegers and hence the noise and crowds of defenders greater than in other parts of the surrounding walls, among which, in addition to the standing army and orderly soldiers, a prominent place was occupied by the city guard and academic youth. Over the gate, missiles flew at the palace of the entailers, in the collegiate church and in the town hall, and the fires they started were unfortunately not prevented by St.. Florian at the top of the gate is the watchman. As far as the eye could see, the meadows were swarming with the orders of Chmielnicki, legions of Cossacks, Sleeping ramparts in Janowice.

Hence, the first shot of Suvorov's cannon was heard, who announced his arrival in the wake of the Bar Confederates in this loud way.

He got out of town through this gate, Kazimierz Pulaski spent a few days in it, that along the southern curtains, slipping between the pond and the embankment, to connect in the Lviv suburbs with the troops waiting for him there.

And just from it, from this gate and from the ramparts nearby, Suvorov was tethered by the crew with fuses by the cannons, until Pulaski had separated himself from the fortress to a sufficient distance.

Here in May, the warm night and the dew that sparkled after it the morning was listened to for the first time with the joyful heartbeat of cannon shots targeting the city, because although harmful, they were pelletier mates, by order of Prince Joseph as an announcement of imminent liberation.

In it, the shackles of political prisoners rattled too - from its shadowy chill, their parade with Mikołaj Dobrzycki emerged into the heat of July rays., Łukasiński's socius at the helm, to break the stones in the dirt of the road and break the bricks to fine sand.

Hence, finally, from the walls of this gate a well-known song flowed, “There is a flower shining on the grounds…”, which Franciszek Kowalski, soldier – poet, on the v 1831 r. standing, He sang with a dreamy heart to himself and to his companions.