Unwanted building objects in the structure of the Old Town

“In recent years, no building has been built in Zamość, which would deserve to be called a work of applied art. It is hard to point to those not even outstanding or interesting, but even correct new buildings. Nijaka, random, sometimes it is horribly ugly – this is what the new architecture of Zamość is like ".

This is how Zamość's new buildings characterize: head of the Department of Spatial Planning, Construction and Monument Protection of the Municipal Office in Zamość, his deputy and chairman of the Lublin Regional Chamber of Architects. Such assessments give much food for thought about architects, and about construction techniques, and about investors, and about decision makers approving technical projects, and then collecting ready-made buildings.

Chaotic, architecture has outgrown its cubature, Buildings that are disastrous in plan and aesthetics are being built in many Polish cities. However, there are such cities, in which it was possible to solve the problem of subordinating the new one, private architecture specific concept.

Zamość should especially care about this, that the new buildings in the city do not stand out in terms of class from the buildings and tenement houses of the Old Town. And how is it in the historic center?

During the period of socialist realism (1949-1956)49 Two tenement houses were erected in the Zamość old town. Tenement house built in 1956 r. on the corner of the western frontage of the Great Square and Lenin Street (currently ul. Grodzka) received the appropriate architectural decoration of the facade. In the same year, a one-story arcaded house was built at the Solny Square (corner of Zamenhofa Street). It was also properly adapted to the surrounding buildings.

It should be noted, that both projects were very successful and did not show the features of the then socialist realist architecture, such as monumental rescaling of city complexes and individual buildings or the use of freely interpreted forms of historical detail.

The worst investment period for the Old Town landscape is in the years 1967-1973. At that time, five buildings were erected, which constitute a clear dissonance with historically formed buildings.

W 1967 On the corner of Kościuszko Street and Wolności Square, a four-storey "modernist" office building of Przedsiębiorstwo Ceramiki Budowlanej was built. Later, it housed the Provincial Committee of the Polish United Workers' Party, and now there is a District Labor Office.

The office building of Przedsiębiorstwo Ceramiki Budowlanej built in 1967 r. on the corner of ul. Kościuszko and pl. Freedom.

W 1970 A one-story tenement house was built at the corner of Grecka and Staszica Streets. The interesting fact is, that it was a private property. In the period 1945-1989 within the Old Town, only three tenement houses remained in private hands. All the others have been communalized. In years 80. XX w. the tenement house was sold due to the owners leaving Zamość. Currently, it houses the Vocational Training Center.

The building of the Vocational Training Center with approx. 1970 r. at Staszica Street 4.

W 1971 in the year at Grecka Street, on the foundations of the former Armenian church, the "Renaissance" hotel was erected. Its stiff, three-story, the horizontally arranged block pushes the harmonious arrangement of the forms of the historical ensemble. The name of the hotel "Renaissance" was given because of this, that Zamość was founded and built during the Polish Renaissance. On the other hand, the form and decor of the building completely do not correspond to the features of Renaissance architecture, only to socialist realist kitsch.

The curtain facade of the PAX administrative and commercial building is similarly unfamiliar in its surroundings, built in 1972 r. at the intersection of Lenin streets (currently Grodzka) and Przybyszewski (currently Collegiate). 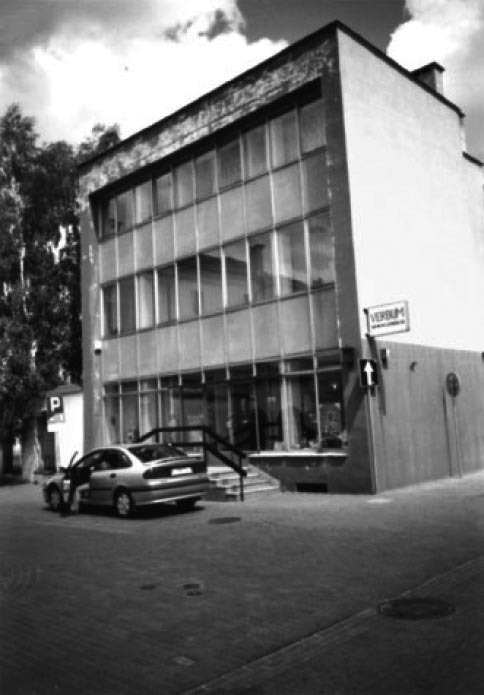 W 1973 on the corner of Grecka and Armiańska streets, opposite the right wing of the "Renaissance" hotel, the House of Various Crafts was built. At that time, such houses were built outside the historic city center. Apparently, this was set from "momentum", not noticing the differences in the form and decor of the neighboring tenement houses.

House of Various Crafts, built in 1973 r. at the corner of Grecka and Armiańska streets.

The five listed buildings still remain in the building structure of the Old Town in Zamość. The assessment of this state of affairs can be complex.

Kostrowicki wrote, that: “Can be interpreted differently, and even falsify statistics, reports, opinions and plans, but the landscape cannot be falsified. The landscape always bears witness to the truth about the human economy ".

Bogdanowski argued similarly: “The historic historic landscape appears as a strict verifier of economic activities, called planning and spatial. Hence the paradox borders on the fact, that in all its post-war activities, spatial planning in the People's Republic of Poland practically ignored the existence of landscape ".

You should judge, that construction at the turn of the years 60. i 70. XX w. controversial in the form of five objects resulted from the ignorance of the authorities rather than the ignorance of the designers. The architects had to have adequate information on the revalorization of urban layouts, if only for this reason, that before and shortly after World War II, Zachwatowicz and Wieczorkiewicz indicated the need for conservation protection of the Old Town.

Only in 1976 year, three years after the construction of the village of 1973 r. House of Various Crafts, the last controversial building in the Old Town, a plan for the revalorization of Zamość was created according to the designs of J.. Macha i A. Five. Unfortunately, it has not been implemented until today.

In twenty years (1974-1994) approx. 60% residential buildings in the old town, introducing, among others. new infrastructure: sewerage and central heating.

In day 14 of December 1992 r. Zamość's Old Town has been inscribed on the UNESCO World Cultural and Natural Heritage List. He is one of over 830 objects protected by the international community in 138 countries of the world.

This fact obliges the city authorities and their subordinate services: planning, urban, architectural and conservation works for special care for the cultural landscape of the city. Protection should consist, inter alia,. on a very careful insertion of new buildings - seals in the historic structure of the city.

In the first years of the 21st century. only two fillings were created, owned by natural persons. The tenement house with arcades at the intersection of Ormiańska and Bazyliańska streets was built in 2000 r.

Tenement house with arcades at the intersection of Ormiańska and Bazyliańska streets, built in 2000 r.

"Corner PUB" in a new tenement house at the intersection of Żeromskiego and Bazyliańska streets built in 2005 r.

In a tenement house built in 2005 r. at the intersection of Żeromskiego and Bazyliańska streets, in its corner, "Corner PUB" created.

Both tenement houses should be classified as extremely successful, because they contain such characteristic motifs of Zamość tenement houses, like arcaded arcades and dormers in the roofs.

Let's compare the photos of the new buildings with the photos, which shows a fragment of the Great Market Square. On the left side we see representative Armenian tenement houses, located in the northern frontage of the Market Square. On the other hand, we can see “typical” Zamość tenement houses in front of us, which define the architectural and landscape canon of Zamość Old Town. The comparison proves unequivocally, which buildings constitute a dissonance in the historical structure of buildings. 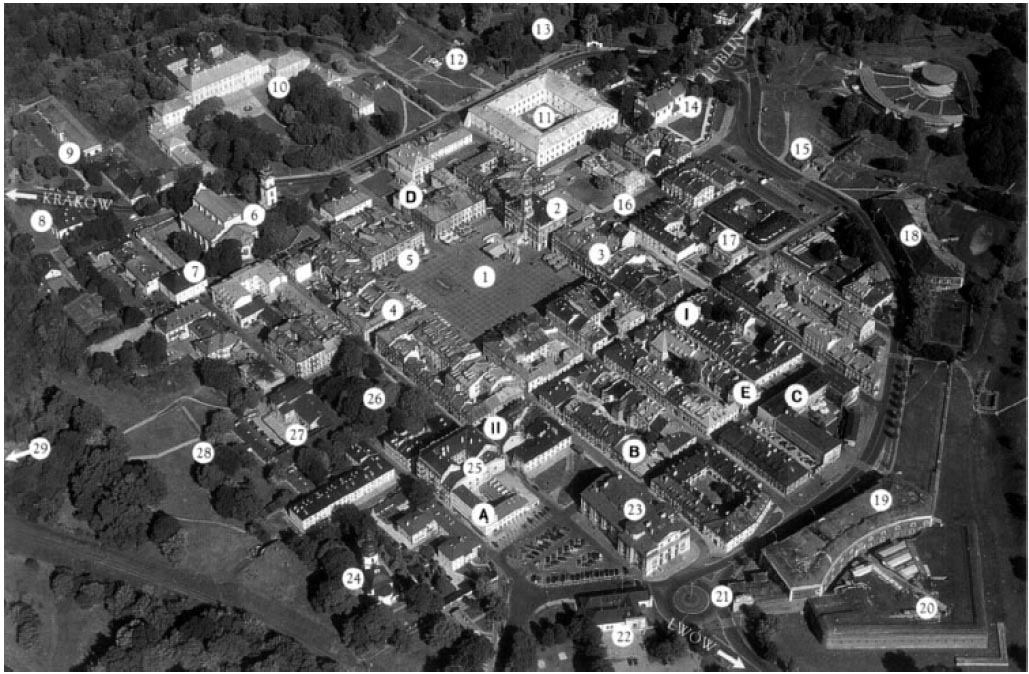 The photo shows the Old Town in Zamość from a bird's eye view. The legend describes it: objects with exceptional urban and architectural values; objects built in the years 70. XX w. foreign to the historical structure of buildings and two tenement houses built in 2000 i 2005 r., which fit perfectly into the city landscape.

Currently, there is no vacant plot for new buildings in the Old Town. These quarters of buildings are renewed, which are included in the revalorization plan. Therefore, all attention should be focused on five objects and reflect, how to adapt them to the surrounding buildings.