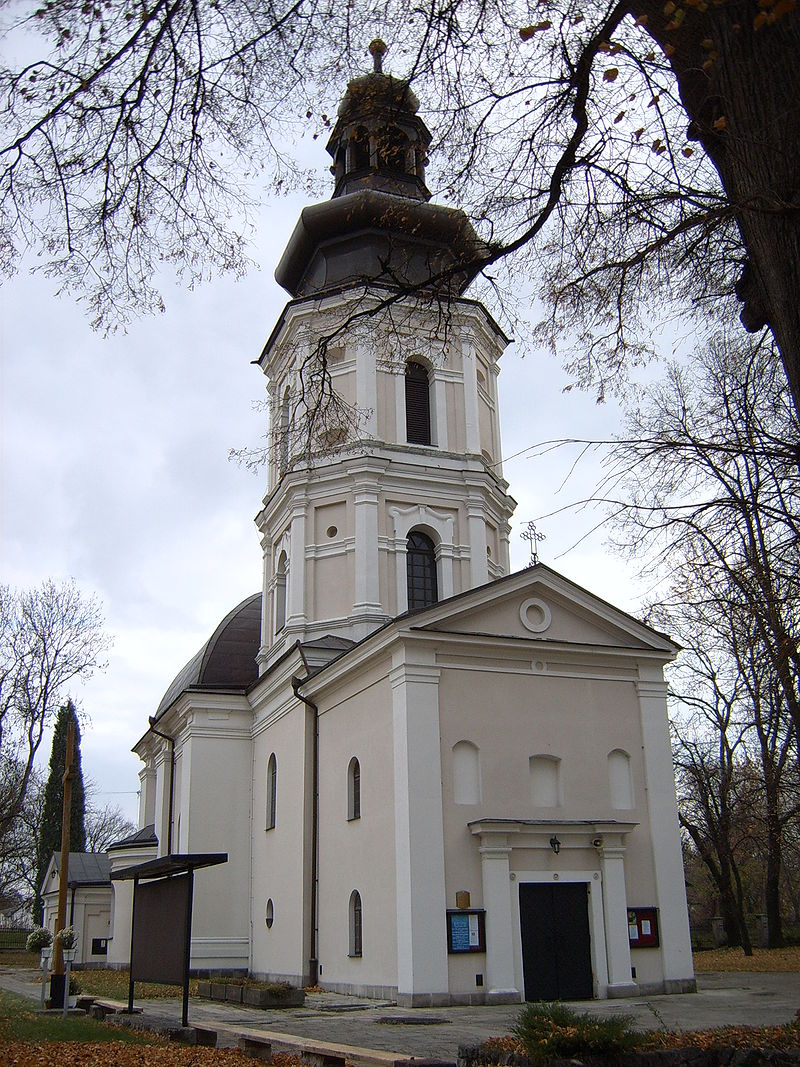 Redemptorist Roman Catholic Church, filial of St.. Nicholas. The temple was originally built as a wooden Orthodox church by the Greeks settled in Zamość at the end of the 16th century., a ok. 1618 r. was taken over by the Ruthenian church brotherhood. At the end of the 17th century. a new one was built, brick church according to the design. Jan Michał Link. About 1700 r. it was taken over by the Greek Catholic Basilians. W 1720 r. the church was one of the meeting places of the Zamość synod, which finally introduced the provisions contained in v 1596 r. Union of Brest. W 1865 r., after the dissolution of the Basilian Order, the church was converted into an Orthodox one, a w 1918 r. taken over by the Roman Catholic Church. Initially, there was a school church here, later religious of the Redemptorists. W l. 1962-93 There was a parish at the church (currently taken over by the Franciscan Church). The body is distinguished by a tall octagonal tower covered with a baroque dome. The square body of the nave with small, closed semicircular apses is covered with a dome with a lantern. The chancel is closed on three sides. The interior vaults are decorated with polychrome stucco decorations. Spod d. Orthodox church we walk along ul. Liian base. Between ul. Kościuszko and Żeromskiego St.. "Central House" from the l. 1910-11, built according to the design. Władysław Lucht, three-story, Art Nouveau.

On the facade from the north. there is an array with 1966 r. commemorating Bolesław Leśmian, who lives here (responsible. Bolesław Lesman, 1877 or 1879-1937) – an outstanding poet, prose, essayist and translator, employed in Zamość in the l. 1922-35 as a court register (Hrubieszów). Leśmian wrote in Zamość, among others. his poems included in the series "Shadow Drink" and "Dziejba Leśna".

Turning left on ul. Staszica, we reach the Great Market Square. The Great Market Square owes its unique charm to the lofty town hall and arcaded buildings of tenement houses topped with attics, in the arcades where trade took place. In total, it is located in the area of ​​the original city 55 arcaded tenement houses. It is the largest team of this type in Poland. Square market with dimensions of 100×100 m are surrounded by tenement houses, po 8 in every frontage, separated by a through street. W pn. on the frontage of the Great Market Square there is a monumental mannerist-baroque town hall topped with an attic, with a clock tower with a height of. 52 m, from which the bugle call is played every day at noon in summer, and with fan-shaped stairs leading to the second floor. The first town hall was built in 1591 r. by B. Moranda, w l. 1639-51 was rebuilt by Jan Jaroszewicz and Jan Wolff. It combined representative and commercial functions and housed municipal offices, Zamość Tribunal, city ​​scales and butchers. W XVIII w. there was a reconstruction in the baroque style according to the design. Jerzy de Kawe and Andrzej Bem. A guard was erected in front of the façade, over which in l. 1767-70 two-winged stairs were built. Another reconstruction in l. 1823-25 in the style of classicism, when Zamość became a fortress. At that time, a two-story prison building was built in the back of the town hall. The town hall was deprived of an attic and decorations, which were restored only in the interwar period. Monumental stairs are the background and setting for public and cultural celebrations, especially for theatrical productions. Above the central arcade, the coat of arms of Tomasz Zamoyski with 1620 r. moved from bastion VII, placed here in 1937 r.