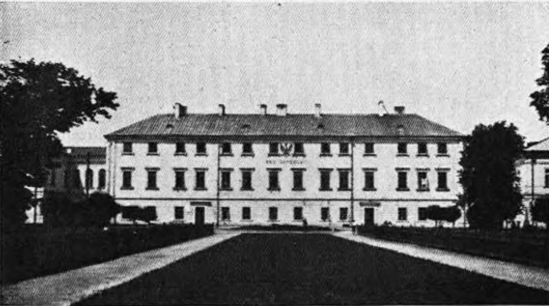 From the Zamość university, we must move our eyes and thoughts to the Hetman's seat, extensive, a two-story building set back from the street, which has a long history over these three hundred and fifty years, which close the period of the Zamość stronghold's existence.

The castle was erected simultaneously with the founding of the city by the already well-known court architect, Morand. Unfortunately, no drawing has been preserved that could fully recreate his then, for the appearance of chancellor's life, but from numerous notes, scattered in the correspondence of those times, it is possible to reveal its silhouette and place it in the environment of that time. It was small, as befits a residence in a fortress, single-winged, two-story and topped with an attic like so many other houses in Zamość. Surrounded by a quadrangle of walls, separated from the city by the collegiate church and the Academy building, enclosed by a ring of gardens, it provided seclusion and the desired peace for the inhabitants.

It survived in this state and its surroundings until the 18th century. In his fifth decade, he was appointed by the then ordinate of Tomasz, from the former, old castle, constituting the central core of the building, transformed with side pavilions and outbuildings, connected with the main part of galleries, in modern, spacious palace. Italy's Columbani, court architect, rejected the perimeter walls during this reconstruction, abolishing this visible sign of barrier. Preserved with 1802 r. the drawing of the castle shows us this work of an Italian master again, with a mansard roof, frontage and the facade and entrance gate with rococo sculptures.

The following years did not add much, and they captured a lot.

The last makeover of the palace, which, however, was not brought to a successful conclusion, started in 1802 r. Stanisław, Married to Zofia Czartoryska, daughter of Prince Adam. The renovation was to go along the line and in the spirit of classicism prevailing in architecture at that time, and entrusted to Itar, Italians who have settled in Poland, who, as an architect, was also a drawing teacher at the Zamość high school, also foreign masters were involved in the preparation of projects.

Political and military events taking place all over the country, and also Zamość itself, who found himself at the center of action and passed from hand to hand, were the reason for abandoning the works already started near the reconstruction. The Austrians, having seized various buildings in the city for the needs of the army, did not spare the palace, which soon ceased to be the property of the ordinates, passed into the hands of the government of the Congress Kingdom, and soon through its transformation into the hands of the Russian government. The latter placed a military hospital in it and, having introduced some changes, brought your residence to the template of the then barracks buildings.

And he was caressed by the former chancellor's thoughtful thought, who wished to enliven the courtyard in front of the palace with a fountain sparkling in the sun. - Later entailers lovingly scrutinized the interior walls with the "fresco secco" technique by Łukasz Smuglewicz, the father of the famous Francis.

Today, there are no gardens surrounding it on three sides, as it was in the times of the hetman, but maybe in the vivid imagination you could see it at dusk, gliding among fruit strains and grapevines, the lofty figure of Zamoyski, sometimes leaning over the lettuce perches, cauliflower, marjoram or radish in a fry with hortulanus, for whom he did not spare the tall jurgel.

Or with Mr. Wydzierżewski Ambroży in an economic conversation about it, how many rye and legumin have already left for barges and commissaries in Krzeszów - soon, thoroughbred sheep will come from Brandenburg's margrave Jerzy Fryderyk to the Sheepfold of Sitaniec - and buffaloes from Transylvania and Wallach for wintering, whether they have a decent room.

Or with the name Korzeniowski in mutual concern for Woźniki and zoners - as both need to improve the breed with horses imported from Turkey and Italy - and listen to what wisely right Calabrian equinox.

Or with the name of Knut Samuel - how many glaziers and glass panes to the palace were sent from the steelworks - and whether the wańczosy ordered by foreigners will finish the orderly sawmills on time - and that the Armenian kurdybans made of local goat skins seem to be noble and beautifully adorned with railing stools.

Or in a confidential conversation with Szymonowicz, during holidays, which are rare in Zamość, to whom he confided in the absence of his beloved son Tomasz, little boy, there and again among the bushes here are running, because too tired of the childish foreign head, though easy to digest the words and play a little now, under the watchful eye of your loving father, you can.

On the bench, the Hetman and Simonides sat down, to look closely at a recently successfully cast medal with a chancellor's likeness - and many of them are needed as gifts for scholars and souvenirs for godchildren.

Bistrucius from sunny Italy any week, in Venice, under the command of the chancellor, he is educating himself in painting, returns.

Giacomo Lauro is waiting for the Queen's instructions, according to which the engravings from the Livonian expedition he would make - not to forget the ino, right tomorrow, send epistles.

Santi Gucci was sick with a pull and gave a long wait for the design of the fountain, until discouragement overwhelmed a man - one has to abandon the original intention and perhaps throw a flower bed in the middle - or perhaps it is better to leave the courtyard free ?

About that Donat pressed in Zamość, on which the good-natured Ursinus worked, and Lenscius also did his best, Karnkowski primate, angry and envious, he makes ugly talks in Warsaw's political discourses and makes him an undeserved annoyance, because it's hard to watch elsewhere, at the same time cover Pokucie and the Podkarpacie region from the blackness of Tatar. - As live, no grammar is to blame for it.

He needs to prepare some apartment for Burski, since it is possible to marry - not Iza, married at the Academy..

It is about pictures for the collegiate church to come.

About young Dousa's recent visit, who also stumbled over Zamość in his journey.

It's about manuscripts, with whom Nicephorus the Greek approached the Academy for a chair of Greek,,or about the Śmigleckie brothers, who, in distant Rome, were stuck in the Jesuit Order, they deprived the university of their young strength and the news gathered carefully with the help of the Hetman.

About Szymonowicz's poetic holidays in Czernięcin. About the unfortunate Jan from Czarnolas.
And so they chatter softly in the western glow sifting through the leaves of young trees, until everything is arranged in the air and on the ground to sleep - and at the gate the form of the gentle monk Convallius, under whose feet the gravel of the path crunches.
This Italian pater Dominicus fell to the heart in a strange way.
With him, she would say the evening prayers together.
And with him in one year - will die…
Perhaps the same imagination will allow us to see the looming face of Władysław IV through some of the palace shafts, who, surrounded by brothers, received the rector of the Academy in the castle and confirmed the privileges of the university.
Or from the gate of the ordinate Jan, who is arriving at the cruel parade with the newly wed Maria Kazimiera d 'Arquien, who found neither happiness nor health in her flock, and which one more time, in the company of another, a royal spouse with a bushy mustache, he would visit this castle twenty years later and then remember those fervent epistles, circulating between the palace and Pielaskowice.
Our hearts will take pride at the sight of the ordinate Marcin from the Viennese expedition returning with the captured, the great banner of the vizier.
Perhaps we will see him preceded by armed townspeople, forming the guard of honor, to the sounds of music, from the side of the collegiate church it goes to the palace of Augustus II, which is to be undertaken by the ordinate widow Anna from Gnina Zamoyska - the same, which shortly afterwards, in a courtesy bow, will greet Tsar Peter entering its doorstep, and the same, at which deathbed, in the yellow candlelight, prefer steadfast in the last hour expressed, the brother of the bishop of Kamieniec married her daughter Maria to the Jewish starosta.

A thousand Russians, according to the wishes of Augustus II, the castle was recessed, the courtyard will suddenly swarm, that there will be no room for us - and Mazepa, wrapped in a fur coat, will traverse its vast space, as in autumn, the former blue morning frost, distant years.

Józef II with the entourage from the house of the townswoman Kawowa, in which the inn stood, on foot to the castle, he will close this procession of royal and hetman's guests and shake us off the spell of transferring our thoughts to previous years and looking for things happening in them in the circle of these walls.