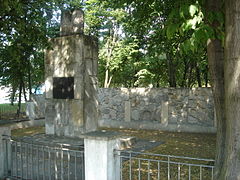 Roman Catholic cemetery, d. also Greek Catholic, Orthodox and Evangelical (at the intersection of Peowiaków and Przemysłowa streets). On it, among others. the grave of Matylda Czerska (d. w 1935 r.) made according to the design. by the outstanding sculptor Jakub Juszczyk (1893-1945), Monument to the Children of Zamość Region in the form of a tall crowned eagle with lowered wings and a pierced heart, placed on a pedestal with plaques depicting the tragedy of children displaced by force (with 1993 r. according to the design. Zygmunt Jarmuła), graves 372 Polish soldiers who died and died of wounds in September 1939 r.

Orthodox cemetery (the. Primate of the Millennium). Established in the middle of. XIX w. Its east. (currently very devastated) part of it served as a burial place for Russian soldiers – Muslims (m.in. Cherkessov). During World War I, German soldiers who died of diseases in hospitals in Zamość were buried there. There is a modern Orthodox church in the cemetery. Currently, the cemetery is used for the burials of deceased Orthodox believers and for the followers of the Polish Catholic Church.. In the vicinity of the cemetery (the. Rebirth 16) there is a small Polish Catholic church erected in 1927 r. according to the design. T. Zaremba. The first pastor of this church was W.. M. Faron, later archbishop of the Polish Catholic Church.

Jewish cemetery (the. Straight) founded in 1907 r. Destroyed during World War II and shrunken after the war. Clothing factories were built on its premises and a street was marked out. On the left fragment of the cemetery, St. 1950 r. there is a monument made of matzevot and their fragments in the shape of an obelisk with two tablets of the decalogue with the text of the commandment "do not kill".

Soviet POWs (the. Szwedzka corner of Topolowa). They were buried here 15 840 Soviet prisoners of war, mostly officers (including 8 generals) – victims 3 POW camps existing in Zamość during the German occupation. They are buried in 13 collective graves and 4 individual. After the war, some of the victims were exhumed to the war cemetery near Rotunda. Among the graves of St. 1969 r. a monument was erected to commemorate the soldiers resting there (proj. Eugeniusz Pol).

The cemetery of the Soviet POWs in Karolówka, where in l. 1941-44 died of diseases, hunger and exhaustion and were murdered close 20 thousand. prisoners. They are commemorated by a monument erected in 1969 r. (proj. Eugeniusz Pol).

The zoo at ul. Szczebrzeska with the area. 16 he has, here from 1980 r. The first was established in 1919 r. on the initiative of prof. Stefan Miter as the only school garden in Poland in the vicinity of. Zamość Academy.