Let's open our eyes wide, for behold, from the mists of distance they loom at first dimly, and then the towers of an enchanted city - a city from a fairy tale - Zamosc lean out more and more precisely.

The tower in front of it is the belfry of the collegiate church in Zamość - behind it a tower shoots up into the sky – watchtower, with the pale pink color of the eastern roses, absorbing itself and with its dome, the ornate little church of St. Stanislaus lying on the edge of the city - and this extensive building with a long arsenal adjoining it, is the former owners palace.

All together, the whole city, which in its panorama unfolds before us - it is a monument.

You look at me in amazement. - - Yes! the most beautiful monument, which he gave himself and his name at the end of the 16th and the beginning of the 17th century, the Hetman and the Grand Chancellor of the Crown, Jan Sariusz of the Jelita Zamoyski coat of arms. 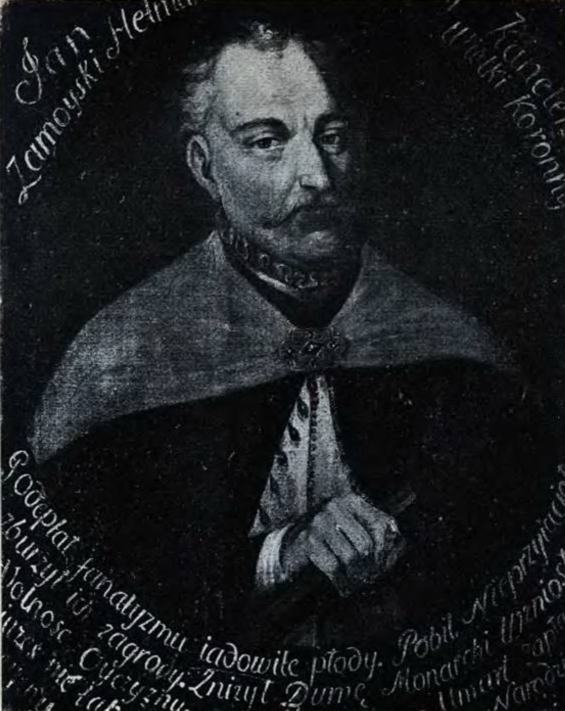 The name of the hetman is known from the history of the interregnum after the Jagiellonians, from the history of Batory and Sigismund III Vasa. His friendship with King Stefan is known, who did not want to be "painted king."” and not painted, but of the finest crystal and of the hardened steel, he chose his advisers. Advisors, who were able to turn their advice into action, or is it occupying the city during the Moscow expedition on the Daugava river, or on the slopes of Wawel, punishing violators of the law with the throat.

The name of the hetman is known, who is "the mournful queen” called after Batory's death, he introduced Zygmunt Waza to the throne, Jagiełło on the distaff side of the offspring and at Byczyna defeated the Austrian Maximilian and captured, and then he fought in the Infants and continued to guard the good of the Republic of Poland until the end of his days.
He took his first studies in the country, he went to Paris for the royal court, where the French scholars listened, then he studied in Strasbourg, and then still learning greedy, he went to the University of Padua under the Italian sky, where he became rector.
Nothing unusual, that so learned and the knowing world could, being wiser than others, to lead and to throne kings.
And no wonder also, that he is in love with the wonders of the Italian Renaissance, he wanted to bring his beloved Padua to Poland and show it to the local people.
And that he was able to combine beautiful with useful, thus the fashion of the then Polish magnates, he decided to build a defensive castle in his lands.
These lands, lowland, in the hum of a huge forest on the Łabuńka River, right-bank tributary of the Wieprz River and lying on the Wieprz River, full of wide swamps, extending south into the San basin, they needed to be defended, because the area between the Bug, the Vistula and the San is a gate leading into the heart of the Republic of Poland, the gate to the path is open, inviting with green meadows and gold of cultivated fields.
It's good to leave the city on this course, which can enrich the owners, as lying on a trade route, and at the same time create a fortress on the Tatar route, admittedly not prohibitive and easy to bypass, but always dangerous to leave behind the enemy's army, I say, which you have to take seriously.

Chancellor Jan Zamoyski thought so, when the plans for the Zamość fortress, with the proficient master of architecture and engineer Bernard Morando, a native of Padua, discussed and approved - and so he thought, when on April 3 1580 he announced the document of the city's location, giving him the name of Zamość, from the settlement of his family, as lying behind the bridge, Zamost called.

The loftiest dreams in this city – the fortress closed - from far Livonia, from near Krakow or near Byczyna he thought about it - he took care of its embellishments together with the artists - within its walls, in a small palace room, a few steps along and across the river, his weary eyelids closed in 1605 r. and in the basement of the collegiate church, it still rests in the crypt.

We will go to that coffin gently before the size of the ghost, bend the knee, but not now. First, we will saturate our eyes with the splendor of colors, with the beauty of Renaissance lines, the lace of the town hall cornices and attic, and then we will go underground, to whisper words of thanks to him through the coffin lid.