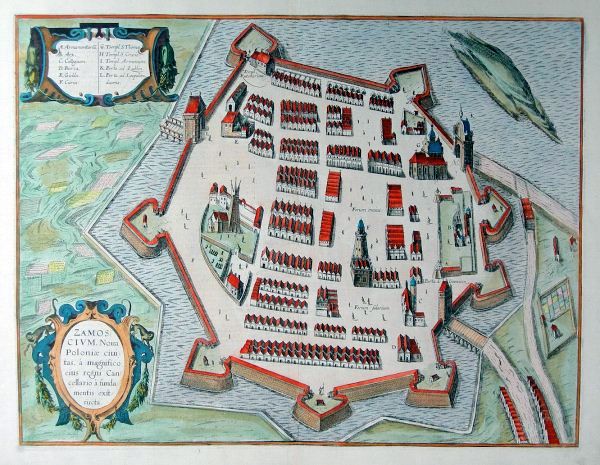 City (ok. 67 000 inhabited) located in Padół Zamojski, over Łabuńka (the right tributary of the Wieprz River), w l. 1975-98 provincial city, from 1999 r. the seat of city authorities with poviat and land poviat rights. Food industry center (meat plants, brewery, mills, egg and poultry plants), wood (furniture factories), clothing, metal. The seat of the Higher School of Management and Administration and the Higher School of Humanities–Economic. Jan Zamoyski. The Zamość Society of the Friends of Sciences operates here, Symphony Orchestra of the Włościańska im. Karol Namysłowski. Zoo (from 1918 r.). The capital of the Roman Catholic diocese of Zamość and Lubaczów. The coat of arms of the city is St.. Tomasz with a spear in his left hand and the coat of arms of the Zamoyski family – Jelita in the foot. Tourist information is located in the town hall.

The city was founded on the land of the village of Skokówka in 1580 r. by Jan Zamoyski (1542-1605) – the Grand Chancellor of the Crown, from 1581 r. who is also the Grand Hetman of the Crown, intended for a residence and the center of the Zamość estate (from 1589 r.). The urban layout of the city center, classified as historic, international class, created in l. 1579-1600 arch. Italian Bemardo Morando on a pentagonal plan, in a checkerboard pattern, with a square large market in the middle and 2 ancillary markets.

Thanks to numerous privileges, the city developed rapidly as a commercial center (mainly with the East) and crafts (furriery, linen cloth). Further privileges favored trade and crafts: settlement of the Armenians (1585 r.), Jews (1586 r.) and the Greeks (1589 r.).

Zamosc developed soon as a research and cultural center. W 1595 r. establishment of the Zamość Academy (existing here to 1784 r., that is, almost through 190 years, and then to 1809 r. replaced by the Liceum im. Zamoyski) and printing houses. W l. 1593-1605 the poet Szymon Szymonowie was active here (1558-1629). The city developed dynamically until the end of the 17th century. (i.e.. mainly during the reign of Jan and Tomasz Zamoyski). At the end of the 17th century. counted 253 houses and 3000 residents. At that time, fortifications were built around Zamość (1617-19, modernized according to the design. J. M. Line in l. 1685-94). At the beginning. XVII w. Zamosc, especially the wooden buildings of the suburbs, it was destroyed by a series of fires. W 1648 r. the city withstood the siege of the Cossacks led by Bohdan Chmielnicki, w 1656 r. Swedes, a w 1657 r. Transylvanian troops of Prince George II Rakoczy. W 1664 r. several women accused of witchcraft were sentenced to burn by a court verdict. The sentence was "lightened" and replaced with the beheading of the convicts. W 1704 r. Zamość was looted and destroyed by the Swedish army, a w l. 1715-16 by the Saxon army. W 1720 r. in the collegiate church and the church of St.. Nicholas, a Zamość synod was held, sealing the Union of Brest (with 1596 r.). W 1771 r. on the outskirts of Zamość there was a battle of the Bar Confederates at. Casimir Pulaski with the Russian troops under the command of. col. Alexander Suvorov (later field marshal and generalissimo of the Russian troops).

From 1772 r. in the Austrian partition (loss of economic and cultural importance). W 1809 r. a strong counting man defended himself in the fortress 2500 soldiers of the Austrian garrison, who succumbed 20 May to the troops of the Duchy of Warsaw. In the same year, the city was incorporated into the Duchy of Warsaw. From 24 February to 25 November 1813 r. long defense of the fortress under the command of. gen. Maurice Hauke ​​during the Russian siege. W l. 1815-1918 in the Kingdom of Poland. W 1821 r. the city became government property, and the ordination center was then moved to Zwierzyniec. W l. 1821-31 expansion of Zamość under the direction of John the Baptist Mallet-Malletski (the Nowa Osada estate and fortifications were built: extensions, cannon post. Rotunda and new gates of Lubelska and Lwowska). During this period, e.g.. palace, town hall, tenement houses.

W l. 1824-25 in the casemates of the fortress by 14 Major Walerian Łukasiński was imprisoned for months (1786-1868)-independence activist, co-founder of the National Freemasonry and the Patriotic Society. During the Polish-Russian war in 1831 r. the defense of the Zamość fortress was commanded by gen. Jan Krysiński – it was the last point of resistance in the country in this campaign (the fortress surrendered 21 November 1831 r.). W 1851 r. Yiddish writer Icchak Lejbusz Perec was born in Zamość (d. 1915). W 1866 r. the fortress was closed, and the city was given the possibility of free territorial development. W 1916 r. a railway line connecting it with Bełżec and Rejowiec was brought to the town, which caused an economic recovery. 20-30 of December 1918 r. an armed uprising of a revolutionary nature broke out in the city, in which also approx. 100 soldiers from the local garrison. The protests were suppressed by the Polish battalion under the command of. col. Leopold Lis-Kula. 28-31 of August 1920 r. the crew of fortified Zamość fought with 4 i 6 A Cavalry Division from the composition of the Bolshevik Cavalry Army commanded by Semyon Budyonny. He created the city crew 31 pp. pod dow. Capt. Mikołaj Boltuc (later gen. brig. killed in a defensive war 1939 r. on the outskirts of Warsaw), several smaller branches and 3 armored trains: "Avenger", "Death" and "Zagończyk". The staff of a functioning Polish army also stayed in Zamość 6 Ukrainian Division with col. Marek Bezruczka, except that the main forces of the division were cut off from the command by the Bolshevik Cavalry Army. In total, the defense of the city counted approx. 3500 soldiers, 12 department i 43 kaemy. Effective defense made it possible to prepare the incoming Polish troops (2 DP and gen group. Stanisław Haller – i.e.. 13 DP i 1 DK) counterattack, which, near Komarow, smashed the Bolshevik Cavalry Army, previously considered invincible.

In the interwar period, the city's monuments were reconstructed and a regional museum was established (1926).

During the defensive war, St. 1939 r. Zamość was seized 13 September by the Austrian armored unit under the command of. gen. Materny, subordinated to the German command. From 27 September to 5 October 1939 r. the city was occupied by the Soviet army, which, as a result of the concluded German-Soviet agreement, handed over Zamość to the German occupiers. During the Nazi occupation, displacements and German colonization were carried out in the vicinity of Zamość. A ghetto for approx. 9 thousand. Jews. Through an investigative prison from 19 June 1940 do 22 July 1944 r. (Rotunda Zamojska) over approx. 50 thousand. people (Poles, Jews and Russians), of which approx. 8 thousand. the Nazis shot or tortured them, and many thousands were sent to concentration camps. From 27 November 1942 do 19 January 1944 r. there was a large resettlement camp in Zamość, through which approx. 100 thousand. displaced (including many children), which were then sent to Germany or concentration camps. In the Karolówka district in l. 1941-44 there was a camp for Soviet prisoners of war, it has lost its life to say the least 15 thousand. soldiers.

After World War II, there was a gradual one, ongoing reconstruction of the city. W 1980 r. the city's 400th anniversary was solemnly celebrated.
W 1992 r. Zamość has been entered on the UNESCO World Cultural and Natural Heritage List.