Coupled system – composite palace, the city and fortifications of Zamość.

The problem of linking the city plan with the outline of the fortifications, as a result of combining two geometric figures, they were the subject of research by the authors of "Fortress Zamość", and then were continued in the works of Jerzy Szablowski, Jerzy Miłobędzki and Wojciech Kalinowski9. The studies by Teresa Zarębska and Jerzy Kowalczyk were devoted to considerations on the order of designing the city and fortifications..

Victor Zin, on the other hand, was careful, that the city plan was a successful compromise between the theoretical designs contained in the Treaties of Italy and the topography of the area. The basic principle is the axial linkage of the city and the magnate residence within one multifunctional organism covered by a common bastion defense system arranged according to the strict rules of geometry. The irregularity of the completed outline of the fortifications and the collapse of the longitudinal axis are the result of adjusting the theoretical scheme to the terrain configuration.

The problem of twisting the city axis in relation to the palace axis is very exciting. Adam Klimek presented an interesting interpretation of this issue. By analyzing the shape of the outline of defensive walls, the internal layout of the city and the castle stated, that the urban complex of Zamość was not the result of a predetermined plan but was growing according to the wishes of Zamojski.

Phases of merging the fortifications with the internal layout of the city and the castle according to Adam Klimek. 1-7 bastion numbering [Loser 1995]

Figure a shows an attempt to geometricize the plan of the palace and city complex. Figure b shows the original construction intention of Zamojski. The castle was included in a rectangular arrangement of defensive walls with bastions and gates. Figure c shows the idea of ​​joining the castle under construction, cities. Figure d shows the concept of placing the curtain from the south side in the extension of the existing castle curtain. By joining two bastions, castle and city, a flattened bastion number was created 2. Because the castle was supposed to be an optical accent to the main axis of the city, there was a need to turn both axles yes, to overlap. In the figure e we can see, that the lock has been tilted from a line parallel to the curtain 3-4, moving it towards the west. At the same time, the city axis was turned towards the castle, simultaneously moving the entire street layout of the city to the south and towards the castle. Curtains 4-5 i 5-6 directed towards oneself, creating a new form of the bastion 5, which arose from two bastions. The bastion has been moved 7 southwards, which made the curtain lengthen 6-7, and the curtain was shortened 7-1.

These considerations by Klimek concern the mutual castle-city system from the years 1578-1580. But already in 1581 Zamojski signed a contract with Morand for the construction of the front palace, that is, a great one and two tenement houses behind the palace. So the palace was built from the castle by adding a part from the south with the same depth as the castle. The extension of the building made it necessary to change the city axis. This was done by twisting the axle on its last section, it is between the Great Market Square and the square in front of the palace. The palace surrounded by its own rectangular defensive system with bastions in the corners was completed approx 1586 year. Finally, the form of an irregular heptagon of the entire urban layout was obtained, deformation of the city layout in relation to the outline of the fortress's defensive walls (rys.f).

The city plan had to be prepared graphically by Morand. However, it was not a static work. The dynamism of the assumptions and the multiplicity of current adjustments resulted from the terrain configuration and the concept of city and residence development, which Zamojski proposed. A harmonious tandem, founder-Architektur, he has done a job worthy of the assumptions of an ideal city, that the shift of the city axis in relation to the center of the palace by Fr. 4 meters to the north is imperceptible. The spatial composition of the city and the mansions surrounded by fortifications is a classic example of a coupled urban layout – complex.

The drawing shows a fragment of the current Zamość situational map on a scale 1:1500. The axis of the city is drawn with a dashed line, which coincides with the axis of Grodzka Street, while the continuous line is the axis of the palace. The dashed line marks the historically shaped border of the honorary courtyard in front of the palace. The site for the foundation of the monument was also drawn. We can see, that the monument does not coincide with any axis, and was also erected beyond the border of the pre-palace square. This situation can also be seen in the photo. The photo was taken, standing on the axis of Grodzka Street, i.e. the axis of the city. 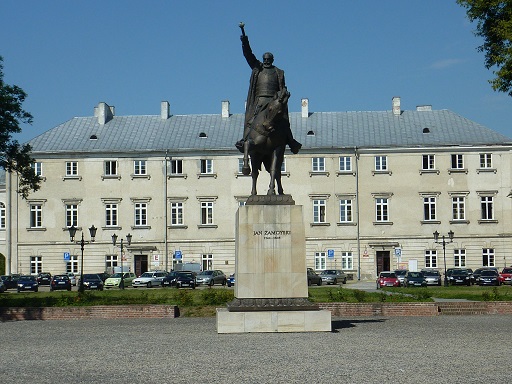