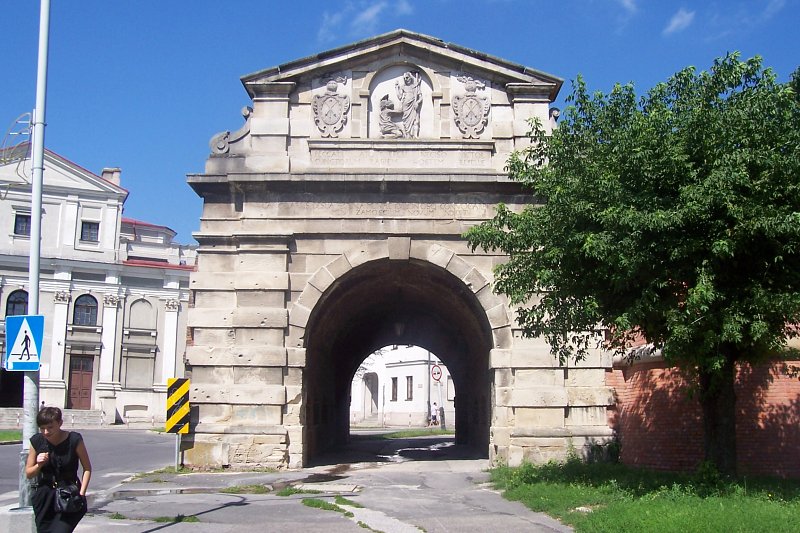 The semicircular recesses of the wall seem to wait for the opening of the now defunct doors, which once creaked on its hinges, when the life of the city pulsated here.

From this gate in 1648 r. these have come out of the city, which was commissioned to burn down the suburbs of Lviv, so that the foreground for military operations would reveal and take away from the enemy the possibility of shelter and curtains.

Under her, as well as under the walls and south-eastern ramparts, in the last weeks of October of the same year, from the direction of Tomaszów, numerous Cossack and Tatar troops began to arrive, preceding Bohdan Khmelnytsky himself.

Through her, Jeremi Wiśniowiecki, when he was on his way from Lviv to Warsaw, he drove into the city for a few days and through it he pushed the banner of Wejher and the bailiffs in the fortress's service to the still remaining soldiers.

It was used by Jan Kazimierz from Lviv to Warsaw, hauling the Swedish invader during wrestling.

It was there that the tumult arose and the shooting began, when Russian General Bauer, returning from the castle from the visit made to the ordinate Teresa, he wanted to kidnap the commander of the Tauben fortress who was kindly accompanying him to the city walls.

In its gates rolled with a creaking and a great clatter of carts loaded with all sorts of good hidden in closed sepets. It's not from a war expedition, ino from the funeral of Mrs. Dzieduszycka from Cucyłowice near Żydaczów, Ordynat Tomasz, many years suing an old aunt for an unpaid dowry, was coming back, not forgetting in the fervent prayers of mourning the loading of goods on carts, which he wanted to hide from his brothers.

The pitiful snare of drums bounced against the arch of the gate, when the Zamość crew after several months of defense, when funds for further did not happen, and Cheek's help did not come, she had to leave the fortress. Pulling in tight rows from the market square, they passed the gate and slowly soaked in the opal mist of the pale south of November 1813 r. One could still see the unrolled banners for a moment before they dissolved into the misty clouds rising from the autumn-wet terrain. I can still hear some clink of a weapon drawn by weak hands, before all the sounds were consumed by the distance.

Walking along the hills and outlines of the old ones, Austrian fortifications, you can feel it almost under your foot in the ground somewhere there, and the south-eastern bastion waiting to be unveiled - your thoughts are still chasing the Rakoczi foreground, which fearing to approach the fortress and cross the Łabuńka River under the Zamość cannons, at a considerable distance through the Jatut family to the south towards Żółkiew, he set off, and having saved some time near Zamosc, he delayed his escape and was overtaken, he was forced to surrender.