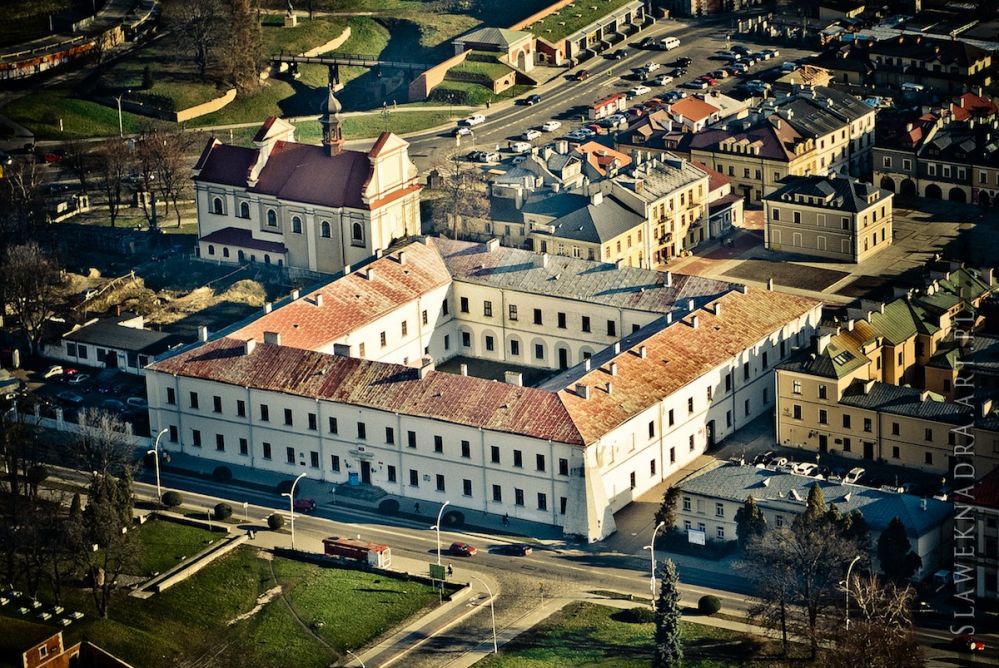 Let's go "dream and dream" on. To wander a bit in the park founded on the old ones, Austrian fortifications, in which among beautifully maintained avenues and squares, among the English way, various specimens of native flora are scattered, through the lace web of weeping willows, you can see a round structure-rotunda, of Austrian times, the remainder. It's worth having a look at it, to look at the model of the old Zamość and find many things that have already been seen on it.

The serious one, The building is strongly supported by the buttresses, is the Zamojska Academy, being the implementation of the thoughts and plans for the reform of education, cultivated by the hetman for many years. Realization of thoughts, striving for the full initiative and best will of the young man, what he was in the period of Valois rule, when in pacta conventa he put as one of the points the renewal of the Krakow Academy and summoning new foreign forces to it in order to refresh the forms of teaching that are crusty in scholasticism. - Implementation of the plans he gave to Batory, establishing "Collegium Regium" in Krakow, which was to rival the standing still, and thus the Jagiellonian university, which is shifting back in the progress of knowledge.

When both have failed, he transplanted them to the area of ​​Zamość that he was building, in which already in 1581 r. founded a school. Its management was taken over by the seasoned Jesuit Jan Herbest, former confessor of Katarzyna Jagiellon in Sweden and lecturer at the Lubrański school. But neither this one, ani inna, parish, at the church of St.. Cross, an existing school in the suburbs of Lviv, nor, finally, the classical gymnasium, the director of which he appointed the famous poet Sebastian Klonowicz, citizen and juror of the nearby city of Lublin, did not satisfy his educational aspirations, nor were they a proper and complete expression of it, what he wanted to introduce.

Therefore, on long winter evenings, he began to intend to undertake a new cultural job in Zamość. These plans matured under the influence of the first rays of sunshine in March 1593 r. and put on the real outline of the shape of the future Zamość Academy, revealed to the delighted eyes of Szymon Szymonowicz, to whom, together with himself, he entrusted the supervision and formation of the school to be established.

And that procrastination was not in the chancellor's nature, already in the fall of the same year, wanting to lay the foundation for the first time, he made a record of one of the many villages for the benefit of a university that was to be built soon, in the next, he obtained the bull of Clement VIII for her.

He wanted to create a school, which would raise the Commonwealth, according to his views, as an experienced senator, friend and advisor to kings, the young noble generation, once intended to hold the helm of the state nave. He wanted to provide society with modern educated people, admirers of the beauty enchanted in classical pieces, people who know the past and present of their nation and neighboring nations.

Hence the efforts to find the best professors brought to Zamość for "my dear daughter” Academy, blessed with chancellor's love as much as her son Tomasz, to whom she was to be the guide of youth.

Hence the long-term care for the programs, which he arranged himself.

Hence the regulation, that a boy's penny would be sent back to him for viewing, on which, by following the progress of science, he could convince himself, whether the pedagogical direction he chose is good?.

Hence the opening of the printing house, in which the Krakow printer, Jarosz, they came to Zamość under the guarantee of Scharffenberg, the first books needed by the Academy were crammed, before Marcin Łęski took over, Also called a lenscius.

The first rector of the opened in 1594 Melchior Stephanides became the year of college, a long line of chancellors and professors behind them. Here is Niedźwiecki, Ursinus called, brought from Krakow by Szymonowicz, in medicine, thanks to Zamoyski, he was educated at the University of Padua, author of two school textbooks, Donat and St.. Augustine.

Here is Starnigiel Wawrzyniec, in Krakow, a scientist again, with a treatise on the tangled, serious discourses abroad, evoking and benefiting academic youth, jako donor "starnigielowskiej bursy11, auto it. Dominik valleys, silent Franciscan monk, they came from Naples, the teacher of holy theology, the court priest of the chancellor and the censor of beautiful lenscius prints. Here is Drezner Tomasz, lwowianin,, law at the Academy professor, hetman midfielder in establishing the Zamojski Tribunal.

Roman Adrian, European famous mathematician, educating mind in Italian and German academies, a critic of the work on squaring the circle, work of a colleague from Gdańsk, Piotr Kruger.

Szymon Birkowski, lwowianin, brother of the famous preacher Fabian, of philosophy and medicine doctor, Professor and physician of young Tomasz.

Solski Kacper, in Italy, he was also a scientist in philosophy and medicine, six-time rector over a dozen years, grateful to Szymonowicz's sisters, he laid the tombstone in the collegiate church in Zamość.

Piotrkowczyk, Andrzej, master of law, in Poland, The secrets of knowledge researching Germany and Italy, author of treatises and a collection of parliamentary constitutions.

Much merited Wcisłowski Józef with a crystal character, the only one almost then, in the era of general dissolution of the Hetman's school, a man with clean hands.

Here are some students:

Zamoyski, Tomasz, chancellor's only son and the hope of the ordinarian family.

Sakowicz Kasjan, later the Basilian Archimandrite in Dubno, who, with the permission of Urban VIII, changed the Greek rite into Latin, highly learned in theology, passionate worker about the unification of Rus with the Roman Church and author of several works on this subject.

These are the Dear brothers, Filip, Alexander and Theodore, they were fluent in classical languages ​​and writing a little book in them to celebrate the return of the ordinate Tomasz from abroad. Philip of them, which he was a deputy at a later age, and the marshal! on the elective after Władysławowo's death, then, as a Smolensk voivode, he sadly remembered his compatriots, I voluntarily give the fortress to the tsar.

And Koźmian Kajetan, poet, one of the last students of the Zamość university.

Although the Academy during the hetman's lifetime did not have a separate building as it did later - after all, it lived its most beautiful times and achieved the highest heights. After his death, those in whom he was able to arouse the love of his dream equal to his, to shape the university for the future of the nation, they led her steadfastly and faithfully to the high places, until a merciless death had cut them off the sequence of days, she did not hand over the queen's work to a foreign country, hands not so loving anymore.

And heirs of the name and successors to less and less knowledge-giving cathedrals. Funding the building by Jan did not help, grandson, together with the mother of the Ostrogski princes Katarzyna. Neither ceremonial by the infuat Skwarski with the roar of shots, guild assistants, militia and mobs, graced by Latin speeches of Abrek Andrzej and Bytomski Jan, Ordination of this edifice.

Neither the seminary building nearby, also erected by Katarzyna, which burned down soon, and then the allowance of Stefan and Dorota, relatives of the ordinate, was supported.

Neither does Griselda Wiśniowiecka write, to be divided between the Academy and the collegiate, because the latter took everything without bothering to pay the fees owed to her university - nor did the deceased recall her brother's will, the collection that is donating to the Academy, deposited in the castle, for this double will has never been fulfilled.

Neither often, although small in total, for it numerous and valuable in the books, professorial legates, which enriched the school library - because it is hardly anyone, the farther in the years, enjoyed.

Passive, and at times even the hostile stance of the chancellor's family, seized due to the Academy's claims in the ordinate treasury, it undermined the authority of the university more and more and tested the honesty of its professors, ordering Andrzej Abrek to hide Kacper Szolec's testament, who will see the light of day only after many years, when there will be no one and for whom to start a new cathedral.

And although later the young ordinate Tomasz Józef would like to reform the school, he would drop his hands helplessly in the face of the apathy of the professor's team, to whom the rigors of Lascaris can barely feel a slight change to their advantage. The shock of the partition did not affect the professor's team, nor conversion to the Royal High School in 1784 r. for Joseph, on this child, not the spirit of the Academy, but her body, nor the name of the provincial school, nor, finally, its transfer to Szczebrzeszyn, where the sad remnants of a once-brilliant college were finally liquidated in 1852 r.