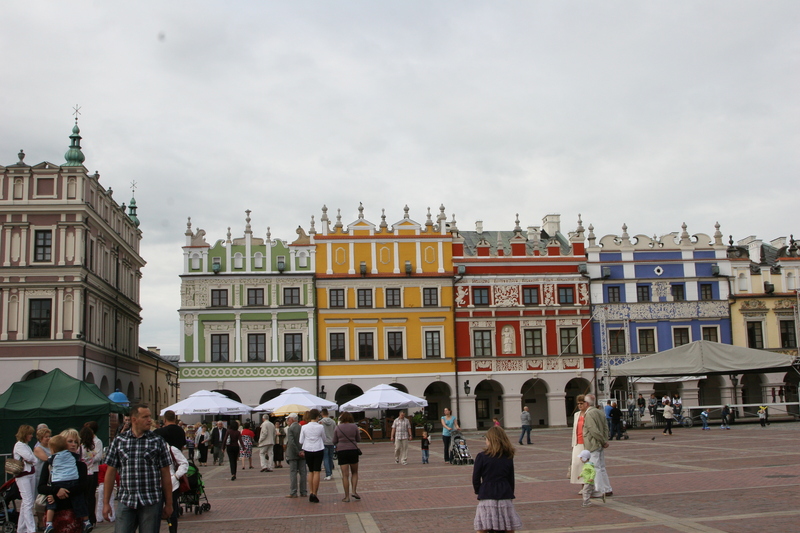 And let's come back again from the distant thought of wandering to the Zamość market square and let's go to the terrace of the town hall, from where you can see the whole thing.

And moving along the arcades, you have to follow the beautiful lines of stone carefully, renaissance – baroque portals leading to the narrow ones, vaulted hallways - you have to pay attention to the old barred windows above the gates, gracefully enclosed by the full lines of the ornament, on the emblem above the entrances with closed door frames, among which is St.. Jerzy kills the dragon, it is the initials of Christ hovering over a heart fiery with love - finally looking at the vaults themselves, here and there decorated with a geometric network of convex stucco and in the halls, of which, often chubby little angels' faces smile at passers-by, or eagles spread their wings to fly.

It is not yet possible to look inside the houses. Maybe in the near future, when the hand of lovers of the beauty of old times reaches there as well and will save these miracles of pilasters embracing window openings with decorative rosettes for the next centuries, these doorframes and fireplaces, these wooden ceilings with traces of craftsmen ornamentation – artists,as long as vandals have not yet managed to make these monuments – residents and vandals – owners destroy completely.

Once upon a time, life flourished here.

The royal favor of Batory directed the trade route from Lviv and the Volyn region to the newly created stronghold - it equated merchants from distant parts here with goods with other merchants, of the then wealthy towns and marked a warehouse of goods from the surrounding lands in Zamość, and even from Gdańsk.

On this and on the second vol. related. Salt market, which also has tenements with arcades, and on the Water Market many local and far-away merchants spread their stalls with various goods, passers-by and permanently settled, as n. p. a chancellor's award for the growth of the city, the Armenians brought here, in the manufacture of alcoholic beverages and morocco, - phlegmatic Germans, prudent Swedes and calculating Scots traders in cloth and silk - fiery Hungarians and Greeks fine wines and thick Malmasias oozing into goblets - Persians colorful and soft carpets spreading under comfortable feet - Italians singing, clinking with armlets of coral rods and jewels - silver at last, Spanish traders in gold and stones, portugalscy, Italian, English and Turkish Jews, who also paralyzed themselves and sell herbs, relief from the suffering it brings.

There were two fairs at first, and then more often a week and fairs six times a year, which Zamoyski approved as a privilege together with the powers of the guilds, as it used to be in other cities and equating them with the privileges of Lviv guilds.

Shoemakers took apart their products, envious of their work and its accuracy; furriers, observing diligently whether within a radius of two miles from the city they are not faced with an undesirable competitor and obstructing the way of importing strangers with their products, Moscow fur coats; carpenters, locksmiths, saddlery, blacksmiths operating elaborate masterpieces next to the equipment of daily necessity; honest butchers, removing chrome and sick cattle from the markets.

The market and provisioning police kept order. And if by chance some dispute arose between the merchant brother, they had assured that their complaint would be settled before the end of the fair, in a fair court established for the convenience of visitors, against whose sentence foreigners could appeal to the ordinate. And the city developed under the care of its founder, who knew how to pursue temporal matters, both my own and my subjects, and thanks to the kings, who confirmed the previous ones and granted new privileges, in understanding the importance of a fortress city in this open path, the leading highway in the interior of the Republic of Poland.