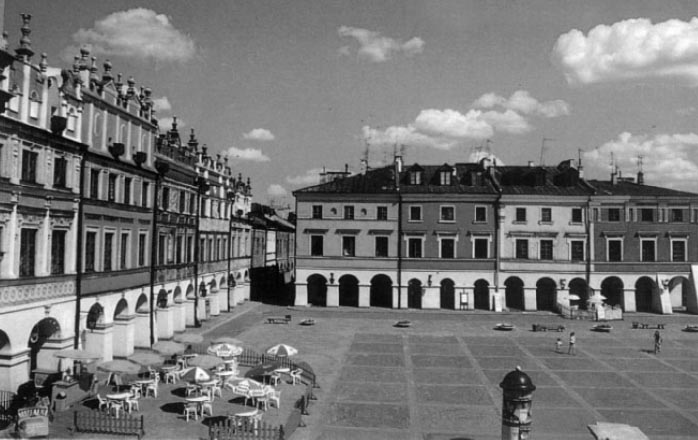 Urban and architectural values ​​of the Old Town in Zamość

Many scientific theses were devoted to Zamość, proving its special urban and architectural qualities. Oto Jan Zamoyski, Polish magnate, statesman, a patron of culture and a well-educated person, was able to practically implement the design assumptions of Italian theoreticians-urban planners of building "ideal cities".

Let us underline, that the authors of the concept of the "ideal city" did not identify it only with the graphic scheme of the city plan, but with the idea of ​​planning an urban organism, rational and beautiful, perfect in terms of programming and spatial development, most fully suited to the requirements of the man of the new age.

Zamość is this happy city, survivors of the turmoil of war, in which buildings have been inscribed authentic development phases over time 430 years.

Victor Zin was careful, that the city plan is a successful compromise between the theoretical designs contained in the Treaties of Italy and the topography of the area. The basic principle is the axial coupling of the city and the magnate residence within one multifunctional organism, covered by a common bastion defense system laid out according to strict geometry rules.

The research results of many authors prove, that the city plan had to be worked out graphically. However, it was not a static work. The dynamism of assumptions, the multiplicity of current corrections resulted from the terrain configuration and the concept of city and residence development, which Zamoyski proposed. The spatial composition of the city and the residences surrounded by fortifications is a classic example of a combined urban layout.

Monumental city buildings: residence. Collegiate. Academy with a dormitory. Merchant's Guild. Arsenal, town hall, model tenement houses, were the work of Bernard Morand. Public buildings increased the splendor of the city, they served the purposes expressed in the Latin inscriptions placed on their facades. Representative buildings were situated on the edge of the street grid, especially at the end of streets running latitudinally. Arranged and planned like this. that they create zones of spiritual and mental life separate from the trade and craft function. The spiritual and scientific life was concentrated in the Collegiate Church and the Zamość Academy, administrative and legal in the town hall, economic and trade in Gila Kupiecka and on the markets.

As the city was building, work on the fortifications was progressing. In years 1586-1593 according to the plan of Bernard Morand, earthen bastion fortifications were built in order to quickly fortify the city. Their outline did not differ from the currently preserved main circuit.

Po 1592 In the year, bricklaying works began on the bastion fortifications. About 1618 r. the city plan was closed with a seven-sided curtain with bastions of the New Italian system.

In years 1618-1630 the fortifications were modernized according to the design by Andrei dell Aqua. The work performed turned out to be very necessary, because v 1648 r. the Zamość fortress resisted the troops of Bohdan Chmielnicki, a w 1656 r. to the Swedish troops of Charles X Gustav.

The defeats dynamized their construction. The townspeople began to build solid brick houses on their plots. In years 1685-1694 Jan Michał Link made another modernization of the fortress. In years 1689-1690 the first reconstruction of the palace took place. The second floor was added, and the interior of the residence has been changed and enriched.

The period of the second reconstruction takes place in the years 1700-1809. Construction works were carried out at the town hall, where was built (1767-1768) fan-shaped front stairs. In years 1760-1775 The collegiate church was given a baroque tower, and a bit earlier, because in 1720 r. a high tower was erected next to the Franciscan church. In years 1769-1774 a new monastery of Poor Clares was established, at the southern frontage of the Water Market.

The main spatial work of this period was the conversion of the Renaissance palace into a baroque residence. The seat of the Zamoyski family was turned into a large two-story one, a late-baroque palace complex with side pavilions and outbuildings. The buildings received mansard roofs. The baroque layout was complemented by garden compositions and rows of trees. The residence remained in this condition until 1821 r., when the city was taken over by the government of the Kingdom of Poland.

By analyzing the successive phases of development, you can see, how systematically the changes of individual fragments of the system took place. There were causal and spatial relationships between successive phases. Zin put it this way: "The development of the city during the 18th century. -when the Renaissance-Baroque Zamość reached its full three-dimensional composition - it was called the period of the second reconstruction of the system. It was still harmonious, creative development of the original concept. It was not even interrupted by the partition of the country ".

The turn of the 18th and 19th centuries. turned out to be declining for the existing phase of the city. Integrally and harmoniously interconnected two elements of the city layout: fortifications and the palace and city complex began to live separately. On 57 for years the military function has become the dominant one.

Already in 1809 year, the reconstruction began, fortifications and modernization of fortifications. In the course of earthworks, many military works and external batteries were expanded. However, planned activities giving the city a military character resulted in a change in the function and architectural form of many buildings.

A hospital was placed in the extended Zamoyski palace, devoid of any decorations. W 1840 r. the town hall was turned into a prison, and the attic was removed from the building. The army occupied the Academy building as barracks, and so does the Franciscan church. The Reformed and Poor Clares churches were used as warehouses. The rebuilt team of Bonifraters was turned into the "Pod Karpiem" inn. Due to the risk of collapse, the Franciscan monastery and the tower were demolished, Armenian church, Reformed monastery and scholasteria. The symbol of the unification of buildings were the uniformly applied yellow plasters of "modernized" buildings. The yellow color was used to the taste of Grand Duke Konstantin.

Transformations of the city's architecture, elimination of tower accents, lofty mansard roofs, lace parapets, as well as the size and form of the followers caused, that the city has lost some of its values ​​as a landscape composition. However, it still remained uniform, compact and rich spatial arrangement, girded with fortifications.

Patch 1833-1866 this is the period of operation of the modernized fortress. W 1856 r. a plan was made, which shows all the internal and external works of the defensive area.

Only ten years later, the importance of Zamość's defense system decreased. The main reason was the development of the martial arts of the nineteenth century. Realizing the decision of the tsarist military authorities from the end 1866 r. on the liquidation of the fortress, some of the masonry curtains were blown up and the embankments were thrown into the moats.

In years 1866-1918 work on the development regulation plan, which, however, was not realized. Problems with land ownership were a barrier to development. The use of the most attractive construction sites in the post-fortress lands was blocked by a dispute with the authorities of the Russian army.

It should be ascertained, that in years 1866-1918 Zamość has become a specific center for the southern Lublin region, for the country, however, it still appeared as "the most perfect manifestation of Renaissance urban planning".

When in 1918 Poland regained independence, Efforts to restore the city's lost beauty began. It was not only due to monument conservators and state authorities, but also the city council.

One of the first works was to restore the town hall to its former appearance and its original Renaissance attic. Then the facades of tenement houses in the Great Market Square were cleaned of about fifty falling balconies. Monumental city buildings regained their former appearance and purpose. It was the first revalorization of a municipal complex of this type in Poland. It was made in the years 1936-1939 according to the "Zamość development plan" prepared by the architect Jan Zachwatowicz and the town planner Władysław Wieczorkiewicz at the request of the Zamość City Hall.

As Jan Zachwatowicz recalls: “It was perhaps the first example of designating a conservation area for a historic town complex as a whole. The case of historical urban centers as well as their protection and restoration was still at that time the state of gestation – it matured and as a concept, and as a method only after the war. Even in the Venice Charter with 1964 r. this issue has not been properly recognized and codified ".

The old town complex of Zamość with its fortifications was entered in the register of monuments 3 July 1936 r. The urban layout with a complex of approx. 120 buildings of municipal and defense architecture have been classified as class "0" monuments of the highest artistic value.

After the Second World War, Jan Zachwatowicz and Władysław Wieczorkiewicz "design of the Zamość development plan" z 1939 r. they changed it into a local plan. To the ideas contained in it, indicating the need to fully recreate the historical system, they returned in the following, post-war editions of the city's spatial development plans. It took place in the work prepared under the supervision of Stanisław Król 1969 r. general plan and the detailed plan of the Old Town under the direction of Zofia Haman; in compiled by Andrzej Piątek and Janusz Mach in 1976 r. plan for the revalorization of the Zamość Historic Complex, as well as in the general plan developed under the direction of Kazimierz Koterba in 1994 r., which lasted until the end 2003 r.

Currently, a new local spatial development plan is in force in Zamość, which was developed in 2006 r. at the Jeleniogórski Planning and Design Office. Recent planning studies, which concern the reconstruction of the 19th-century post-fortress areas, were created at the Faculty of Architecture of the Cracow University of Technology, in the Department of Open Landscape and Engineering Buildings.

Presented, in a nutshell, the issue of the urban and architectural development of the Old Town in Zamość proves the uniqueness of the urban organism created by Jan Zamoyski and Bernard Morando. For over 430 Years of its existence, the urban layout has remained virtually unchanged, and the architecture of tenement houses and monumental buildings has been largely restored to its original form.