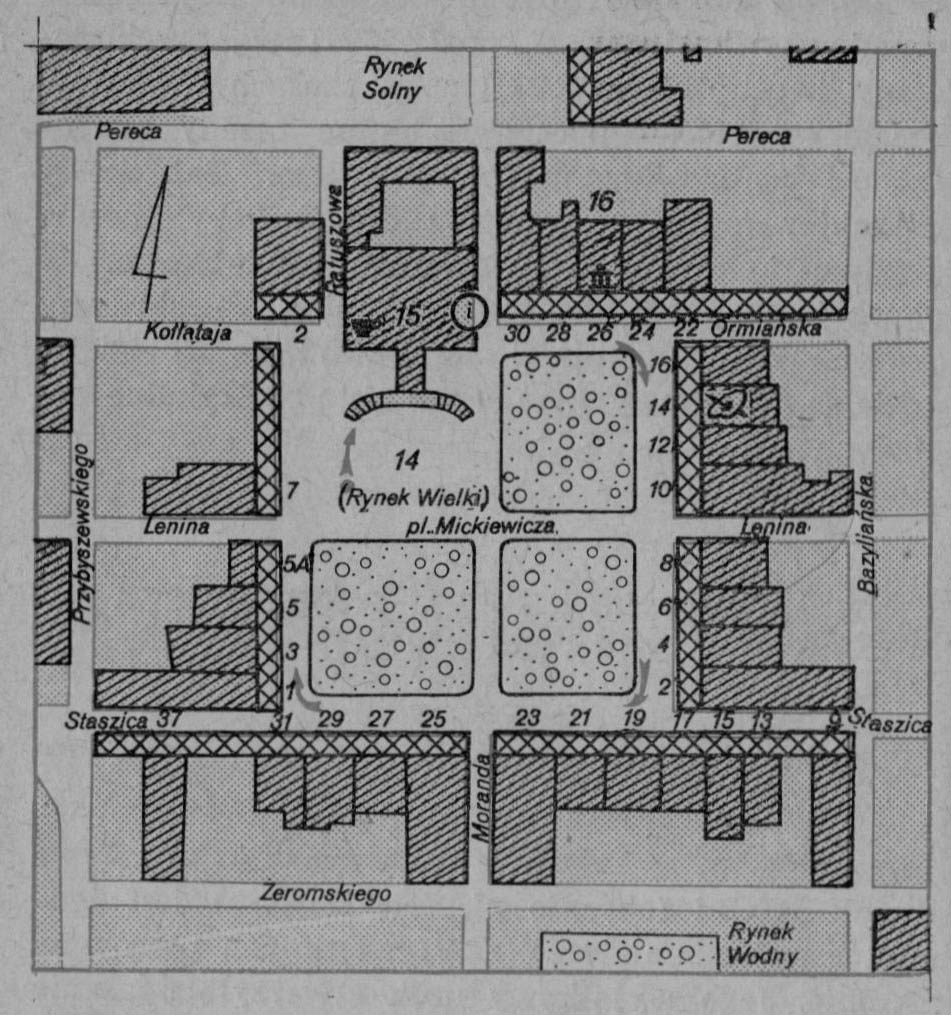 The Great Market Square (pl. Mickiewicz) is one of the grandest 16th century squares in Europe. Its unique charm is created by surrounding it with arcades of tenement houses. Deep perspectives for arcades, emphasized by the chiaroscuro rhythm of vaults and arcades, they captivate every viewer and create a sublime mood. Ring one- or two-story market tenement houses fasten like a jewel the lofty building of the town hall with a slender tower, in the frontage. The Great Market Square is perfectly square, with dimensions of 100X100 m. In every market frontage, after 8 tenement houses in 2 blocks separated by a through street.

The commercial life went on, and today, in the shadows, but the Market Square was basically conceived as a representative public square from the very beginning, on the pattern of the ancient ,,forum publicum "or the Italian" piazza ". The smaller markets - Solny and Wodny - were the proper markets, interconnected axially. In front of the facade of the town hall in the 17th century. there was a pillory in the shape of a column topped with a figure. Harmonious development around the square, it arose gradually. The beginnings were modest, first, wooden frame houses, however, from the end of the 16th century. they were replaced with brick tenement houses with arcades and attics. The construction pace was fast, since in 11 years after the city was founded in the Great Market Square there were 24 houses, a only 8 unbuilt plots. Already in 1596 Zamość made a great impression on the Italian MP Vanozzi, who admired the city built in the Italian fashion and admired the Market Square "surrounded on all sides by loggias (underestimation), where are the shops with various goods ".

The obligation to shape the facades according to the pattern created by Mo-rand contributed to the harmonious development, also observed in the 17th century. House with arcades and horizontal facade division (obligatory window frieze) he referred to the North Italian patterns, contained m. in. in the books for the architecture of Sebastian Serlia. The high houses gave the houses Polish character, ridge attics covering recessed roofs. The layouts with a passage hall on the axis prevailed in the plans. in the front rooms, with windows overlooking the arcades and the entrance from the hall, there were shops. The first floor was residential. For two-story tenement houses in the 17th century. Spacious rooms were added from the courtyard, covered with beam ceilings on gravy.

W 1 half. XVII w. single-story houses were built up or built from scratch; achieved the highest 2 floors. It was the period of the greatest development of the Zamość tenement house. The rich decorations of facades with various artistic motifs come from this time: Italian, niderlandzkich, oriental, as well as many beautiful stone portals with renaissance forms, mannerist and early baroque style.

End of the 17th century. The first and eighteenth centuries were a period of stagnation in buildings due to the economic weakness of the middle class, caused by. in. difficulties in trade with the East. Rich Armenians left Zamość at that time, Greeks and Sephardic Jews. Many tenement houses passed into the hands of the nobility and clergy as well as Polish Jews. XIX w. brought the greatest losses among the tenement houses of the Great Market Square. Some of them were pulled down, all were stripped of their attics, using them partly in the superstructure of floors. Sculptural decorations were sculpted on many facades. At the turn of the 19th and 20th centuries,. even balconies were added. The old beauty of the tenement houses is gradually restored by conservation works carried out in 1. 1935— —38, 1954—56 and from 1964. The last renovation has so far covered only 2 blocks of houses in the eastern frontage. and 1 block in the southern frontage.

Town hall, currently the seat of the Municipal Office, located on the Mon.. the frontage of the Market Square, it is an outstanding urban accent; It is distinguished by a lofty body crowned with an attic, clock tower. 52 m and wide fan-shaped stairs from the front. Its characteristic shape was created as a result of several construction stages from the 16th to the 18th century.; in terms of style, it is heterogeneous, mannerist–baroque.

The town hall was immediately included in the program established in 1580 cities, but its construction began only in 1591. The original one was erected by B.. Moranda na 2 construction plots within the market frontage, next to tenement houses (and not in the middle of the Market Square, as usual), to which he resembled arcades, but it was distinguished by a tower. W 1605 tower, due to the threat of collapsing, was reinforced with huge slopes by the bricklayer Michał Belter. The Morandów Town Hall was thoroughly rebuilt in the. 1639—51 by Jan Jaroszewicz and a bricklayer Jan Wolff. The building was then significantly enlarged and raised; It received the current three-story body with a high attic and regular, rhythmic divisions of the façade with pilasters and conch recesses in the spirit of mannerism. Only the tower remained from the original town hall (although also increased by the upper floor) and arcades at the front. The new body of the town hall was widened at the expense of the neighboring plot from the west. and the street from the east. and was isolated from a row of tenement houses by creating from the west. the narrow street of the Town Hall. Moreover, it was extended to the front, ,,absorbing ", tower body. WITH* 3 sides received arcades - from the front and sides.

Not only municipal offices found rooms in the town hall, but also the Zamość Tribunal for cities of ordination. The city weight was located on the ground floor, where is now a cafe. Next major redevelopment, in late baroque forms, was probably carried out according to the design. Jerzy de Kawe. W l. 1767—G8 has a guardhouse in front of the façade and is monumental, two-winged stairs supported on arcades, leading over the guardhouse to the first floor. W 1770 the tower received a slender helmet with a lantern (a date tag was moved from the previous one 1651) and miniature helmets on the corners of the attic with copies of the Zamoyski Jelita coat of arms.