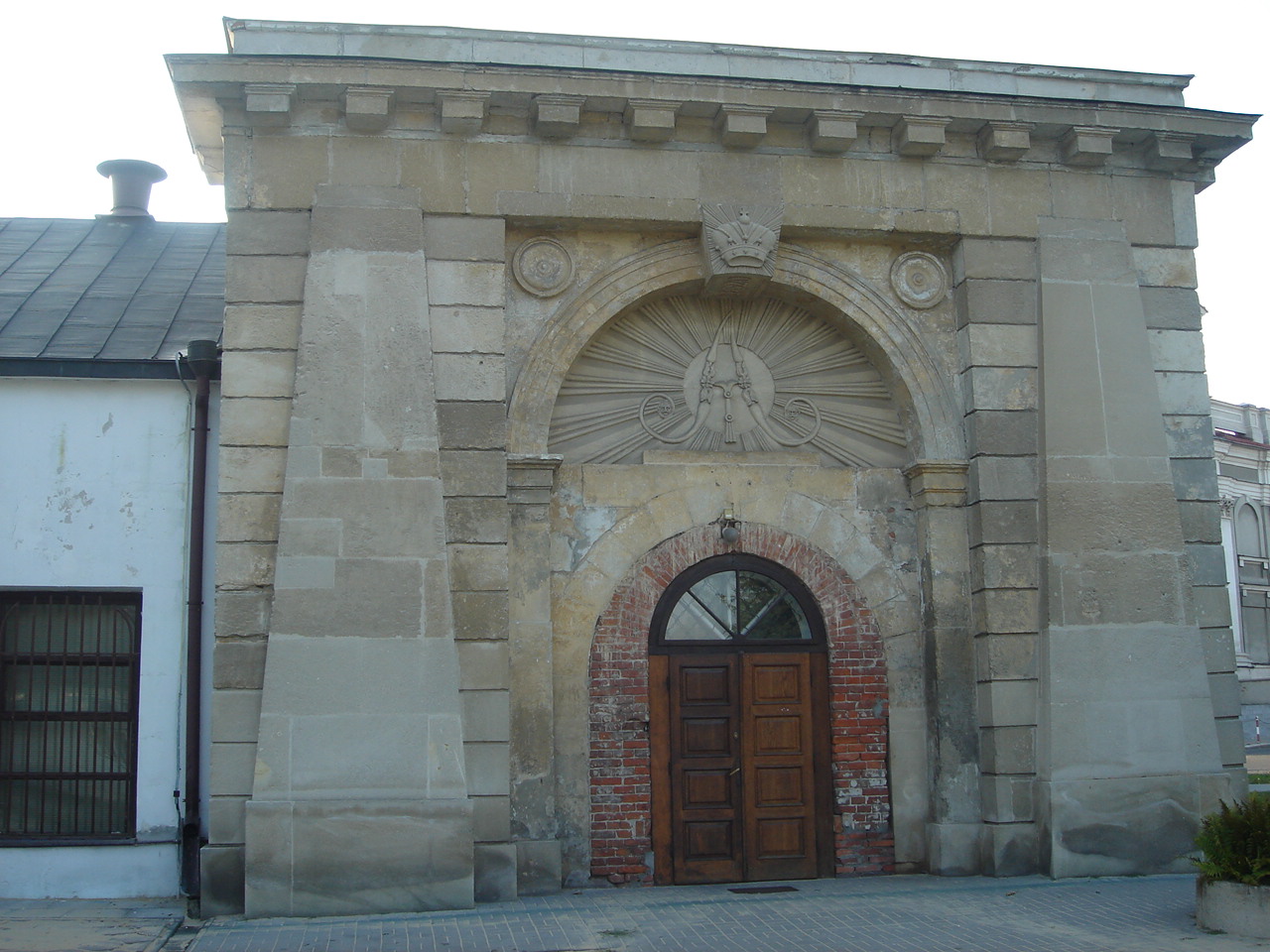 We start our tour from the car park at ul. Partyzantów. There used to be three gates leading to the city: northern – Lublin, south – Szczebrzeska and eastern – Lwowska. In front of us, on the left, the New Lwowska Gate, erected in 1820-21 according to the design. Eng. Jan Paweł Lelewel in the classicist style. The tympanum contains the initials of the Tsar of Russia and the King of Poland, Alexandra I, and on the key the arcades of the tsarist miter and the year of construction 1820. From 1980 r. it houses the seat of the Polish Włościańska Orchestra. Karol Namysłowski (Old Zamość and Chomęciska Małe). On the right, the Old Lwowska Gate, erected on 1597 r. according to the design. B. Moranda in the mannerist style. In the triangular gable there is a recess with a bas-relief of "St.. Thomas the Apostle (patron of the city) at the side of Christ " – chisels J. Pałczyński. Cartouches with the Zamoyski coat of arms on the sides – Intestines. There are diagonal arrowslits in the side walls. After going through the gate, on the right, the entrance to the bastion no 7, in which a tourist route was created leading along shooting galleries and through casemates (sightseeing on request in the market hall in Nadszaniec). The bastion was transformed into l. 1685-94 during the modernization of the fortress by Jan Michał Link, and then by John the Baptist Mallet-Malletski in 1 half. XIX w. After the construction of the New Lviv Gate, The old one was turned into casemates. There was a cell between the gate and the tower, in which he was held in l. 1824-25 Major Walerian Łukasiński. At the entrance there is a bas-relief with 1924 r. proj. Stanisław Kozubek with a portrait of Łukasiński depicted as a prisoner chained to a cannon and the words "There is no power, which would overcome the true love of the Fatherland ".

Walerian Łukasiński (1786-1868), co-organizer and leader of Polish Freemasonry, then from 1821 r. Patriotic Society, he was relegated for his activities, chained to a wheelbarrow, and then embedded in 1824 r. in the casemates of Zamosc on 7 years. Sentenced to death after the mutiny that took place here, later replaced with 14 years. He spent in Zamość 421 days, later he was taken to Góra Kalwaria, then to Warsaw, from where, after the outbreak of the November Uprising, to Szlisselburg, where he was imprisoned for the rest of his life in solitary confinement in a dark dungeon.
He spent the whole time in tsarist prisons 46 years. Towards the end of his life, with progressive blindness, he wrote a diary. The Tsar was convinced, that the outbreak of the uprising 1830 r. was the result of two previous conspiracies: Walerian Łukasiński and Antoni Krzyżanowski.

The huge building adjacent to the cell is called a swamp, d. cannon post, which also served as barracks, was built in the l. 1825-30. A two-storey brick and stone building, covered with earth, has a facade length. 94 m. Currently used as a market hall. At ul. Łukasiński, above is the second loft, z l. 1825-35, erected in the neck of Bastion VI, proj. J. Ch. Mallet-Malletskiego – now houses a school.

In front of the gates there is a Franciscan church, currently par. Annunciation of the Blessed Virgin Mary, z l. 1637-55 the foundations of Tomasz's ordinates, and then by Jan Sobiepan Zamoyski according to the design. Jan Jaroszewicz and Jan Michał Link. W 1784 r. there was a dissolution of the monastery, during the Kingdom of Poland, demolition of the monastery and belfry and reconstruction of the church, first into a warehouse, and then to the barracks. High gables were pulled down and the roof was lowered. W 1993 r. the church was reconciled, the Franciscans returned to him. A parish was established next to it. Monastic part from 1946 r. houses the State Secondary School of Fine Arts. On the south. from the Franciscan Church, for pl. Freedom, the solid d is visible. Orthodox Church, then the Greek Catholic Basilian – now the Redemptorist Roman Catholic Church, filial of St.. Nicholas.