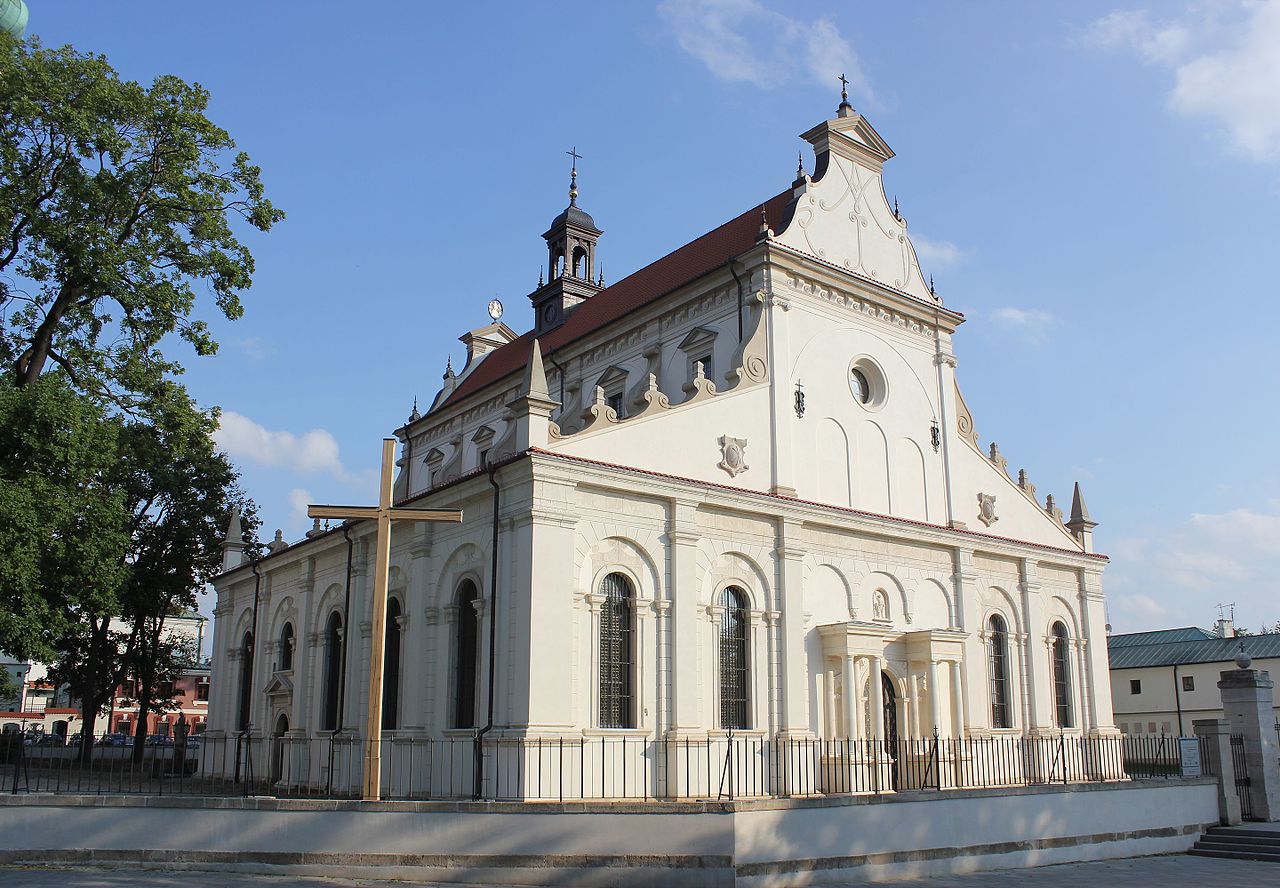 From the Market Square, ul. Staszic, we go to the cathedral. We enter the church area through the gate-belfry built in the. 1760-75 according to the design. Jerzy de Kawe. She have 45 m wys. and bell z 1662 r., called "John", about weight 4300 kg and height. 160 cm (one of the largest in Poland). In the passage under the bell tower there are plaques dedicated to the Martyrdom of Children of the Zamość Region, Home Army soldiers from the Zamość region, the soldiers of the Peasant Battalions and the priests of the Zamość deanery who were murdered by the Nazis. The belfry is open to the public and is a vantage point.

Cathedral (do 1992 r. collegiate) Of the Lord's Resurrection and St.. Thomas the Apostle, Foundation of Jan Zamoyski as a votive offering for victorious expeditions, which he led, was built in the l. 1587-98 according to the design. Bernardo Morando. The decoration of the vaults of the naves and chapels took place in the. 1618-30, and reconstruction according to the design. Jan Mallet-Malletski in the l. 1824-26 (change of elevation, lowering the peaks, Removal of inscriptions and the Zamoyski coats of arms, blurring the votive-victorious character of the temple). W l. 1989-91 the top of the façade has been reconstructed. In the temple there were "coronations" of ordinates performed by prelates. The plan of the temple is a fifteen-fold reduction of the city – ma 45 m long. i 30 m wide. It could hold 3 thousand. people, so much, how many inhabitants were Zamość to count. It is a three-nave structure, pseudo-basilic, surrounded by a wreath of chapels.

In the main nave, above the inter-pillar arcades, there is a decoration in the form of male and female heads alternately placed (m.in. soldier, poet, Egyptian, Queen) about undefined symbolism. The chancel is two-span, lower than the nave, closed polygonally, with double windows on the bends of the walls. The main altar, originally Venetian with paintings by Domenico Tintoretto (from 1783 r. in the church in Tarnogród, stolen from there recently), currently in stucco, marbled, was made in l. 1783-85, late baroque with figures of St.. John the Baptist and John the Evangelist, the founder's patrons, and St.. Peter and Paul, with the image "Unfaithful Thomas" in the main field and the group of "Holy Trinity" in the finial. Silver, rococo tabernacle from l. 1744-48 is one of the greatest works of goldsmithing in Poland and presents one more scene of the denial of St.. Thomas. In the recess of the tabernacle, a late Renaissance pacific with the relics of St.. John of Dukla – made before 1618 r., founded by Tomasz Zamoyski. In the chancel, lower than the main nave, pictures from the life of St.. Thomas made approx. 1627 r. probably by Jan Kasiński (student of Tomasz Dolabella).

In the Ordynacka Chapel, called. also the Transfiguration of the Lord, topped with a stucco vault by Jan Baptist Falconi, Wojciech Gerson's painting "The Transfiguration" and portraits: Jan Zamoyski – founder of Zamość and his son Tomasz Zamoyski – all of 1869 r., the tomb of Jan Zamoyski (with the wrong date of his death 8 June 1605 r. – should 3 June 1605 r.) decorated with coats of arms: Intestines – Zamoyski, Herburt – Herburts, Search communication – Uhrowiecki and Bończa – Fredrów, chancellor's and hetman's insignia, that is, a seal and a mace, and bundles of various types of weapons. Next to it, there is a tombstone of Tomasz Stanisław Zamoyski (XIV ordynata) made in 1891 r. by the Milanese sculptor Antonio Argenti in white Carrara marble.

The Rosary Chapel with a copy of the painting of Our Lady of Częstochowa. Infułacka Chapel with a painting of St.. Nicholas with the figures of the founder (Father Mikołaj Kiślicki, of the first Zamość inflow) and the royal couple (Zygmunt III Waza with his wife), with 1613 r., made by an artist from the Lviv school. The chapel of relics with numerous reliquaries placed in it. Academic Chapel with a painting of St.. Jana Kantego – patron of the Zamość Academy, the coat of arms of the Zamość Academy and the epitaph of Dominik Convalis (d. 1605) – book censor (the censor was employed by a printing house operating at the Zamość Academy). The Annunciation chapel with the image of the Annunciation, made by Carl Dolci in 1650 r. (date on the back of the benches). Jest to wybitne dzieło ‘europejskiego malarstwa religijnego będące swobodną kopią wizerunku z XIV w. located in the Church of Santissima Annunziata in Florence. Chapel of the Crucified with a rococo crucifix in the altar, in the side wings 6 passion scenes.

Chapel of Our Lady of Graces with a painting of Our Lady of Protection, traditionally painted on the door of the town hall by a man unjustly condemned and freed as a result of prayers. At the end of the left aisle, there is an altar with a local cult image of Our Lady of Zamość from 1618 r. Above the figure of the Madonna, five figural representations with the Holy Trinity in the center, God the Father on the sides, The Annunciation and the Birth of Christ. Entrance to the crypts made in 1779 r. (available for sightseeing) is decorated with an inscription in English. Latin, "Grateful memory to the founders". In the crypts the ashes of the ordinates and their families, starting with the first ordinate – Jan Zamoyski (d. 1605), up to representatives of the family who died in the 20th century. A memorial plaque placed in the crypt 9 members of the Zamoyski family who died in. 1942-85 in exile. There are also epitaphs inside the church: Szymon Szymonowic (d. 1626) – author of "Żeńców" and Paweł Piaskowski (d. 1613), companion of hetman Jan Zamoyski's military expeditions, Szymon Birkowski (d. 1926) – the rector of the Zamość Academy, philologist and prof. medicine, and a plaque commemorating soldiers who died during World War II 3 DP Leg. (the gorge with the image of Our Lady of the Gate of Dawn embedded in it was funded by the last commander of this division – col. Stanisław Tatar, later gen. brig.).