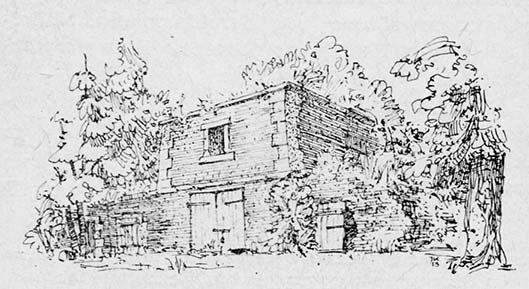 After leaving the Park, we go south-west. to the Old Lublin Gate. It was one of the 3 city ​​gates of the Jan Zamoyski foundation. It was built at the earliest, because already before 1588, by B. Moranda.

The mannerist facade of the Gate, about the strict forms of the Tuscan order, with rustication used for a fortress structure, it was decorated with a bas-relief in the attic, depicting the Polish community on the throne, with an eagle and a scepter in his hands. The performance was accompanied by Latin, patriotic inscription, edited by the Hetman: "Hello, Mother Poland, the host, we should defend you not only with walls, but also with the dedication of life, for the Star of Nobility and Freedom Poland, welcome us ". This gate served as a triumphant one, because after the victorious battle of Byczyna, hetman Zamoyski introduced through her in 1588 an excellent prisoner - Archduke of Austria Maximilian, an unfortunate pretender to the Polish throne. In memory of the memorable event, the Hetman ordered the Lublin Gate to be walled up forever. For two hundred years, travelers who came to Zamość via the Lublin route had to travel around the city to the Szczebrzeska Gate. The Lublin Gate was opened only in 1790; then it was also enlarged by guardhouses.

In connection with the expansion of the fortifications during the times of the Duchy of Warsaw, the New Lublin Gate was built in a different place, and the former one in the years 1821-22 was thoroughly rebuilt into prison casemates, in the style of neo-Mannerism. After the defeat of the fortress in 1866 The gate was partially demolished. The oldest part from the 16th century. there is the upper middle section with a covered gate, vault. However, both stone and brick facades come from the aforementioned 19th-century reconstruction, conducted under the direction of gen. Mallet-Malletskiego. It is planned to adapt the Gate for tourist purposes.

At the Old Lublin Gate from the east. was placed in 1962 a plaque commemorating - as the inscription says - "Place sanctified with the blood of victims of Nazi crimes committed in 1939-1944"

Execution site, to tzw. Gymnasium garden, or rather the playing field of the Gymnasium located in the Academy building, cut in August 1939 anti-aircraft ditches. The executions were carried out by the German gendarmerie, occupying the Academy building, twice a day, morning and evening throughout the occupation, since autumn 1939. Those shot here were:. in. Polish military, Soviet POWs, who escaped from the camps in Karolówka and at ul. County, partisans, peasants, priests. Before that, they were subjected to investigation and torture in the so-called. Switchboard at ul. Żeromski, where the gendarmerie staff was located and in Czernicki's house at ul. Przybyszewski (headquarters of the SS). In the Gymnasium Garden, approx. 2 thousand. people. Germany, wanting to cover up the traces of their crimes, began the exhumation of the bodies at the end of the occupation, by taking them to forests near Sitaniec. After the war, the rest of the bodies were exhumed and placed at the Rotunda.

A square has been arranged in the area of ​​the Ogrodek, on which in 1962 a granite memorial boulder dedicated to the martyrdom of the children of the Zamość region was placed. The inscription on the brown board is shocking in its content: "Children of the Zamość Region murdered, deported by the Nazis in 1942—1943 - on the 20th anniversary of the displacement and pacification of the people of the Zamość Region ". Before the boulder there is an alley with a row of candles, shrubs and flowers.

Children of the Zamość region died en masse of diseases in the camp for displaced persons at ul. Lublin, where they were forcibly taken from their mothers and selected; they were starving, thirst and cold in rail transport during winter 1942/43, died in the Majdanek and Oświęcim camps. Murderous Nazi action, unprecedented in the history of the civilized world, covered approx. 30 thousand. kids, most of which died, she was tortured; some of them were transported to Germany and Germanized.