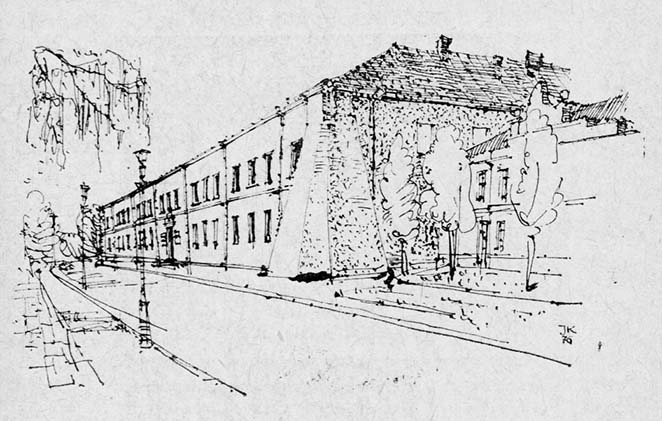 Opposite the square, there is the building of. Zamość Academy. A large two-story quadrangle at the corner of ul. Akademicka and Peretz, now the seat of the 1st Secondary School of General Education with beautiful traditions. Jan Zamoyski and secondary vocational schools and the Administrative Study of the University of. Maria Curie-Skłodowska in Lublin.

Due to the opening in 1594 by Jan Zamoyski Academy, the first buildings with auditoriums and houses for professors and students were built (Bursa), designed by B.. Moranda and situated in the NW. city ​​area. However, the layout of the academic district from the first period is not known. It was certainly designed to be equivalent to the collegiate church on the north-south axis., intersecting in front of the residence with the longitudinal axis of the urban layout. These equivalent arms of "Akademia t- collegiate church ”in the spatial organism of the city had their counterpart in the legal and organizational relationship of these two institutions. 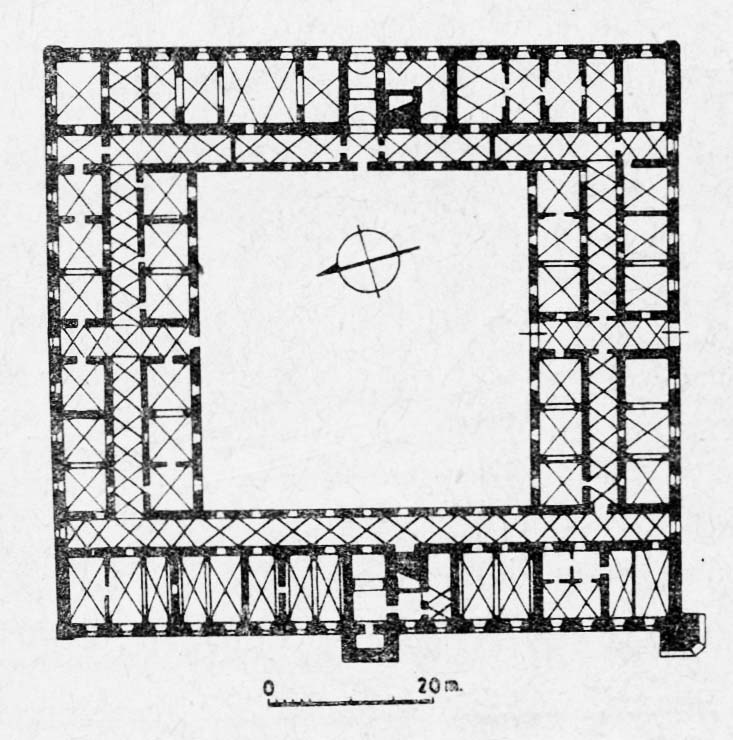 The present four-sided building with a courtyard was erected in the second phase of the history of the university, w 1. 1639—48, from the foundation of the 2nd ordinate, Tomasz and Katarzyna Zamoyska née Ostrogska, probably according to the design. J. Jaroszewicz (the ceremonial laying of the cornerstone took place after the death of the founder 29 VIII 1639). A model layout of the early baroque building, regular, with strict symmetry and alignment with the cross communication system, related to the solutions of the buildings of Jesuit colleges, is an outstanding achievement in the field of school architecture in the 17th century. in Poland. Two-bay eastern wings. i zach. (front), through which the axis of the foundation passes with gates and staircases, large auditoriums on both floors, chapel, library and printing house.

W 2 other wings, three-bay with cross corridors in the middle, there were flats for professors and lodgings for students. A spacious open courtyard was on the ground floor with 2 sides with semicircular arcades on pillars and surrounded by an ornamental frieze running above.

As a result of the deplorable state of the Academy in the 18th century,. the neglected building was rebuilt after the reform of Bishop Laskarys, carried out in 1. 1752—65 by the Zamość architects Jerzy de Kawe and Andrzej Bem. The building was replaced with an attic, a high mansard mansard roof, in line with the late baroque fashion. After the dissolution of the Academy of 1784 and after the Zamość Gymnasium was moved to Szczebrzeszyn in 1811 the building was converted into military barracks for several dozen years. During the reign of gen. Mallet-Malletskiego, ok. 1825, the building underwent impoverishing reconstruction in the spirit of "barracks": the mansard roofs were removed, the arcades in the courtyard are bricked up, portals and window frames forged. After the liquidation of the fortress, St. 1866 schoolchildren returned to the building again, with the break in occupation 1939—44, when the German gendarmerie was located there.

The organization of the Academy was envisaged by Jan Zamoyski immediately in the assumed city. Already in 1581 there was a school headed by the talented philosopher, Fr.. Jana herbesta, however transformed into 1584 in the parish school at the church of St.. Cross in the Lwów Suburb. Only in 1589 a more ambitious secondary school was established - a gymnasium headed for three years by the Latin-Polish poet Sebastian Klonowicz (Acernusa) from Lublin. Zamoyski's advisor and co-organizer of the Academy was the outstanding court poet Szymon Szymonowicz (Szymon Bedoński from Lviv, then known as Simonides), who he recruited in Krakow 3 first professors and contributed to the launch in 1594 printing house. The public announcement about the establishment of the Academy was issued by Zamoyski 5 IV 1594. A few months later, Pope Clement VIII, approving the establishment of the university by a bull, added his Aldobrandini family coat of arms to the Academy's emblem.. On the occasion of the official opening of the university (5 III 1595) Zamoyski published his "Appeal to the Poles" with famous words: "These are the commonwealth and the keeping of their youth".

The Zamość Academy, in the intention of the founder, was to be a civic school intended for noble youth preparing for state service. The structure of the university was modeled by Zamoyski on the famous Sturm school in Strasbourg, which he himself attended in his youth. Zamoyski defined the organizational structure and detailed curriculum in the Academy's foundation act issued in 1600. The studies were two-stage: lower preliminary stage (classes inferiores) and normal higher (classes superiores). The languages ​​of instruction were Latin and Greek. Initially, they were created 3 departments: philosophical, legal and medical. Cathedrals were established 7; their salary was connected with the canons at the collegiate church in Zamość. The first rector of the Academy was Melchior Stefanides.

Organizational and legal connection by the university founder with the collegiate, economical, but quite medieval (the scholastic supervised the Academy on behalf of the chapter), it had a negative impact on the future of the Academy. The university had a Catholic character from the very beginning and was focused on gaining non-religious and schismatic youth from the South-East for Catholicism.. the lands of the Republic of Poland. W 1603 a chair of theology and canon law was established, and her professor Dominik Convalis, a Franciscan friar from Naples, became the first censor of books. Contrary to the intentions of the founder, the character of the university quickly changed from state-noble to plebeian, with numerous youth of bourgeois origin. In the years 1607—09 among 237 noble youth constituted only newly arrived students 5%.